Capernaum (pronounced “kuh PUHR nay uhm”) in Galilee was the headquarters of Jesus’ ministry and the home of his disciple, Simon Peter. In that time, it was a bustling city of about 6,000 people (both Jews and Gentiles) and was situated on a major trade route that connected Damascus and Alexandria. Located beside the Sea of Galilee, fishing was a prominent trade there.

Historians tell us that Jesus most likely lived with Peter when in Capernaum. In fact, Archaeologists think they’ve found remains of both Peter’s ancient home and the synagogue where Jesus taught in Capernaum. The house lies about 80-plus feet away from the synagogue, and was discovered under the ruins of a fourth-century church. Today, the location is marked by a modern Franciscan church in what’s known as Capernaum National Park.

About: For Bible Study Nerds™

Copyright © 2014 to present by Nappaland Communications Inc. All Rights Reserved. 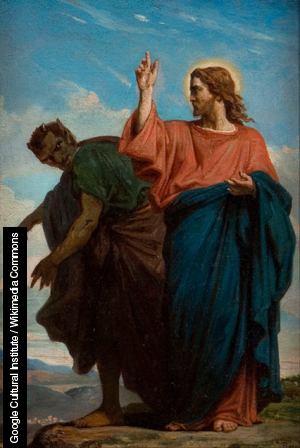 Matthew 4:1-11; The Temptation of Jesus (Inductive Studies)
archives most recent
More from Beliefnet and our partners
previous posts

Bible Resource Spotlight: Matthew: A Theological Commentary on the Bible

Reader Appeal: Pastors, Bible teachers Genre: Commentary FBSN Rating: B+   It seems strange that asking a theologian to write a Bible commentary would be considered, well, strange. But in the “academic silo” world we live in, the fact is that theologians don’t typically write commentaries. Professors of biblical studies write commentaries, while theologians write, […]

Reader Appeal: Pastors, Teachers, Seminary Students Genre: Commentary FBSN Rating: A   The risk with Christian history and theology is that voices from our shared past are often drowned out by the voices of today’s popular thought leaders and megachurch pastors. Of course, there’s nothing wrong with listening to modern theologians. It’s just that sometimes […]

“Are you the one who was to come, or should we expect someone else?” It’s interesting that John asked an academic question, recorded in Matthew 11:3, and Jesus responded with a legal answer (Matthew 11:4-6). John’s question really only required a yes-or-no reply, but instead of giving that simple solution, Jesus convened an impromptu, informal […]