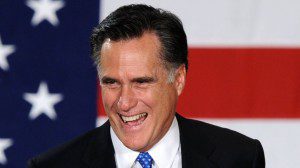 I have a confession to make: even though I knew I had to wake up at 4:30 this morning to catch a flight, I stayed up well into the night for the nail-biting final results of the Iowa caucuses. I wanted to see if Mitt would pull it off.

“I don’t actually care about this,” I told my husband. It was a lie. He knew it, I knew it, and the American people knew it.

What is true is that I have no logical reason to care. If Romney wins the Republican nomination, I will not be voting for him in the general election. His politics are not my politics, not by a mile.

But part of me wants him to win the nomination — not just because I think Obama can beat him, and not just because I’m the co-organizer of a conference in New York in three weeks on Mormonism in American politics and the event will be more of a wake if Romney has fallen off the radar by then.

I want him to win the nomination for the same purely irrational reason that so many Republicans refuse on principle to vote for him: because he is a Mormon.

I know that religious affiliation is a perfectly stupid reason to support or oppose a political candidate. But let’s for a moment be honest with ourselves. For all our high-minded discussions of policy, studies have shown that at the end of the day most people vote on pure gut reaction. They either like someone or they don’t. They identify with someone or they don’t.

I’ve never met Mitt Romney, but I know five people who know him personally, two of them very well. Four of the five have only good things to say about him as a human being, and one of those four is politically quite liberal. He worked closely with Romney in LDS church callings in Boston and was impressed with his integrity and commitment to helping people, even though they did not see eye-to-eye on politics.

Part of the deal with being a member of a religious minority is that you cheer when members of your little tribe are successful in the world. I have major issues with Stephenie Meyer’s fiction, for example, but I’m proud of her accomplishments.

So to Mitt I say: Rock on. Celebrate your victory with a well-deserved glass of ice-cold Sprite today. I will also raise a Sprite in your honor.

A More Spiritual 2012: Failing Forward with God
archives most recent
More from Beliefnet and our partners
previous posts