Publish Your Book on Amazon: A Q&A with Tony Jones (Part 2)

Yesterday we talked with Tony Jones about the content of his new book, The Church Is Flat. Today we’re doing a behind-the-scenes look at why he decided to self-publish for the first time, and what he learned from the experience. If you’ve ever thought about putting a book on the Kindle, read this. –JKR

With your successful track record of publishing with traditional presses, why did you decide to self-publish this book?

I put the whole thing on a scale. I weighed the options. How much more would I benefit from going with a real, traditional publishing house? I might sell more copies, but I’d make way less money for each sale. If I were a professor at a seminary, I might have an easier time to get tenure. But I’m not a professor, and I don’t need tenure.

When Seth Godin announced that he would never again publish a book with a traditional house, that’s because he’s done the math. He’s not trying to be a sacrificial lamb whose career will go up in flames. It was a risk-free announcement for someone like him. For the rest of us, we have to do some math and figure out what we have to gain and what we have to lose.

Other than tenure, what do publishers add to the equation for authors nowadays?

Supposedly, traditional publishers have this thing called a marketing department.

I know, I know. Silly me, Pollyanna that I am. They have a way to distribute books to retailers that you and I lack. But Amazon, and B&N, and the iTunes store take care of part of that problem by going directly to consumers. I’ve been blogging since 2004, and I get good traffic on my blog. Here’s what’s ironic for me: That traffic is one of the things that would interest a traditional publishing house, but it’s that very traffic that makes me think I don’t need a traditional publisher. If I’ve got x number of thousand people who read my blog every month, people I can reach directly and might buy my book, what does a publisher bring to help me find more readers?

And self-publishing can be a better deal financially for the author as well.

Right. I can sell a book on the Amazon Kindle, and if you price your book between $2.99 and $9.99, you can make 70% pure profit. At a traditional publisher, the author might make 14%. And that’s 14% on the wholesale price. On Amazon you set your own price, and you can change your price at any time. Coming up, I’ll probably drop the price to $4.99 for a month-long promotion.

So what was the process like to make your book available on the digital platforms?

What a lot of people are going to do who go this route is they’re going to hire someone who knows the coding language for the Kindle, the Nook, the iTunes store, etc. Of course, they’re three different languages. When it comes to the technology, we’re fighting right now between VHS and Betamax. Before the MP3 became the format for audio files, there was the WAVE music file and some others, but the MP3 became the de facto format for electronic audio. And one ebook format will ultimately reign victorious. Probably it’ll be the .mobi, which is the one that Amazon uses. I had to learn that language.

I’m pretty savvy at this computer stuff and felt up to the challenge. I was loathe to pay somebody else to do something if I could learn it myself. I spent the better part of a week figuring this out, and it is tricky. You have to have three or four different programs going at one time. It’s too clunky right now.  But anyone who’s got a bit of patience with themselves and likes to learn new things can figure this out.

What did you tackle first?

My friends had told me that I would sell 70-80% through the Kindle and then dribs and drabs in other formats. After you do the Kindle, you learn the Nook, and then the iTunes store. And the sales go in that order.

Once I had the book online I also wanted to make it available in print, so you just go to Amazon’s CreateSpace, and you format your print book. That’s actually the trickiest of all. You format your pdf and they send you a proof that you have to pay for. Since Amazon owns CreateSpace, they automatically list the book. You set your own price on that, too, and get your own ISBN.

What about marketing? How are you doing that?

I can’t say I’ve done a great job of marketing it, but I also knew my book was very nichey. It’s an academic book and would be a tough read for a lot of people. I belong to a Yahoo group for people who are really into Jürgen Moltmann’s theology, and I posted about my book to that group, since my book is one of the first to explore Moltmann’s ecclesiology.

Now, one problem area for me at this point is that I think the book should be available at theological libraries and seminary bookstores. But they’re still reluctant to stock a book that’s not from a traditional, trusted publishing house.

What has the feedback been on the book?

One of the interesting things about the Kindle is that as an author, you can go to your highlights. It’ll list on the book’s Amazon page what the most popular highlights are. I could see after a week that seven people had highlighted certain passages. I kind of parlay that information into more marketing about the book. I wrote a blog post about what people were underlining in the book.

You’ve got a really striking cover for the book.

Covers really matter on the Kindle, and in ebooks. What a lot of people don’t understand, and what traditional publishers often miss, is that not only do covers matter, but they’ve got to look good at thumbnail size. My wife Courtney, who’s a photographer, helped me find the art. We kept looking at it at thumbnail size on Amazon and asking, “Does it pop?” When your book is listed at the bottom of the page as recommended reading, or alongside books that customers have bought, you want a full-color cover that stands out. The back cover doesn’t really matter – in fact, we didn’t even design a back cover until we did the print version.

If you had to go back and do it all again, what would you do differently?

I don’t think I would do anything differently. I’m thrilled with how it turned out. As you know from authoring books, I look at it and I know that it could be a better book. I could have spent more time writing, editing, and perfecting it. But because it was a dissertation, it had already been read with a fine-tooth comb by a whole group of committee. 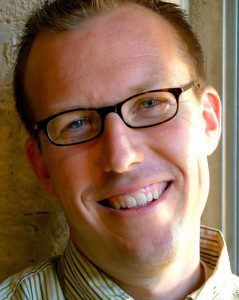 The Church Is Flat: A Q & A with Tony Jones (Part 1)
archives most recent
More from Beliefnet and our partners
previous posts