Polygamy by Numbers: How Many Mormons Were Really Involved?

Last week I discussed the question of polygamy’s role in Mormon theology and whether the LDS concept of heaven still suggests it will involve plural marriage. I’m intrigued by the apparent gender breakdown of the comments on this post, on Twitter, and especially on Joanna Brooks‘s Facebook link, which had 92 comments as of this morning. In general (insofar as gender can be ascertained here), it seems that many Mormon men have very little problem with imagining a polygamous heaven; Mormon women, not so much. As one woman tweeted, “I’d rather stay telestial if that’s what they’re offering.”

I’m with you, sister.

Today’s post concerns another aspect of polygamy that bothers me, as it clearly bothered the blog reader whose story I discussed last week. Remember that an important aspect of this woman’s disaffection was that she felt betrayed—lied to by a bishop who swore to her that polygamy was a non-issue when she could discover for herself through basic research that polygamy has been accorded a far higher place in LDS theology and history than her bishop led her to believe. I’m inclined to give her bishop the benefit of the doubt and assume he simply didn’t know Mormon history very well, which is all the more likely given the untenable and misleading statements about polygamous history that we sometimes hear from high-ranking church officials in Salt Lake City. Therein lies a problem.

For example, in a 1998 interview on Larry King Live, LDS prophet Gordon B. Hinckley assured King that polygamy was only ever practiced by 2% to 5% of the Saints. Unfortunately, that’s an error—and because it was stated by a living prophet, it’s an error that has been repeated over and over as gospel truth.

President Hinckley did not pull the figure out of thin air. The single-digit figure comes from just over a century ago, when Joseph F. Smith had to testify in the Reed Smoot hearings about polygamy’s persistence. Smith said that “3 to 4 percent” of men were practicing polygamy at that time, some 14 years after the Church had officially disavowed the practice.

However, Hinckley’s conversation had been about when the Mormons “came west” in the 1840s, a completely different marital landscape. Hinckley asserted that polygamy had been permitted “on a restricted scale” during this time, and trotted out the 2 to 5% figure.

But not only was that figure describing a situation more than a decade after Mormons weren’t supposed to be practicing polygamy anymore, it was an estimate of the men involved with plural marriage. Obviously any percentage which included women would be significantly higher, and estimates of children living in polygamous families would be higher still.

The question remains: How widespread was polygamy in the 19th century? Professional historians put the figure for polygamy at a low of one-fifth for the late nineteenth century and a high of nearly one-third, with practices varying considerably from community to community and decade to decade. Historian Tom Alexander says:

At present, perhaps the best estimates of the number of polygamous families among late-nineteenth-century Latter-day Saints range between 20 and 30 percent. Nevertheless, studies of individual communities show a wide variation in the incidence of plurality. Using 1880 census data, geographer Lowell C. “Ben” Bennion found the lowest percentage of polygamous families—5 percent—in Davis County’s south Weber and the highest—67 percent—in Orderville. He found 15 percent in Springville. In a study of St. George, historian Larry Logue found nearly 30 percent of the families polygamous in 1870 and 33 percent in 1880. (Alexander’s centennial history of Utah, quoted in Flake, The Politics of American Religious Identity, 65 and 192)

I spoke with a historian last week about these numbers, and was reminded that statistics themselves are fungible (and that the actual numbers for polygamy were likely higher in the late 1870s and 1880s, when many polygamists went underground to avoid arrest). The real issue is: what question are we trying to answer with the number?

Numbers don’t tell the whole story. “I think the answer that explains more is to say that polygamy was always practiced by the elite, though that’s an unfortunate term,” said this historian. “Consequently, the statistical number across the board for Mormons may be relatively few, but that belies its importance. Religiously, it was a very big deal.”

Almost all of the highest-ranking leaders of the Church were polygamists in the late nineteenth century. Polygamy was at the center of LDS society, sermons, political lobbying, and soteriology. To downplay its historical significance is disingenuous.

I’m reminded of the late 1990s, when we were all given the new Relief Society and priesthood manuals that dealt with the teachings of the prophets. The first year’s prophet was Brigham Young, and if you looked at his timeline, only his first wife, Miriam Works, and his second wife, Mary Ann Angell, were mentioned. And Miriam had died before he married Mary Ann. So, if you were looking at the Young timeline and had no other historical information to go on, you would naturally assume that Young had been a monogamist who married again only after he became a widower, and that he only ever had two wives.

Such a sanitized presentation is simply wrong, both factually and morally. Mormons don’t need to dissemble about our history. We can acknowledge the past honestly without feeling defensive. 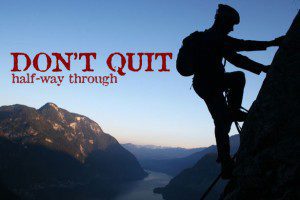 We Are More Than Halfway through the Twible...
archives most recent
More from Beliefnet and our partners
previous posts