It’s summertime here at Flunking Sainthood, which means that I’ve put away any heavy theology tomes for the time being and am reading fiction. Lots of fiction, including YA. So each week in June I’ll be reviewing a YA book or series. Please let me know of any YA recommendations you have! –JKR 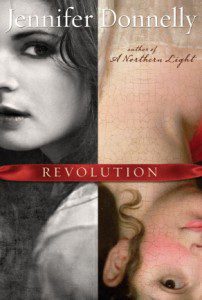 Other books I’ve read by this author: The Winter Rose

How I found the book: American Library Association top 10 pick of 2010

Especially recommended for: Readers who are traveling to Paris, guitarists, history buffs, and anyone interested in the French Revolution

In Jennifer Donnelly’s (mostly) satisfying novel Revolution, Andi is a gifted but suicidal Brooklyn teen who can’t quite forgive herself for the accidental death of her younger brother two years earlier. While her mother teeters on the brink of insanity, Andi’s controlling father leaves his new home in Boston to descend on Brooklyn to discover why Andi, a former straight-A student at an exclusive New York prep school, is failing all of her classes except guitar. Andi’s father makes her come to Paris for Christmas break to write her neglected high school senior thesis and buckle down with college applications. (Yes, several weeks in Paris doesn’t sound like much of a punishment, but Andi’s father is not exactly great company, and mostly she just wants to drown herself in the Seine. Or jump from the Eiffel Tower.)

While in Paris, Andi discovers the 18th-century diary of another 17-year-old girl, Alexandrine, who was a street entertainer and puppeteer at the time of the French Revolution. This is where readers are going to have to strreeeeeetch their imaginations to accept the novel’s many contrivances: for example, that the key Andi wears around her neck, purchased at an American flea market by her little brother, just happens to be the key that opens the guitar case in which Alex’s diary is hidden; or that the very composer that Andi has selected as the topic of her senior thesis just happens to be a figure in Alex’s world.

If these were the only plot contrivances, I would have given this novel an A; the characters are rich and complex, the setting marvelously imagined, and the pacing brisk. Donnelly’s historical research is also wonderful (particularly the chilling history of Paris’s underground catacombs, which I now want to tour). However, and this is a big however, the novel takes a bizarre turn toward magical realism near the very end, and it just doesn’t work. It’s very difficult to include magical or supernatural