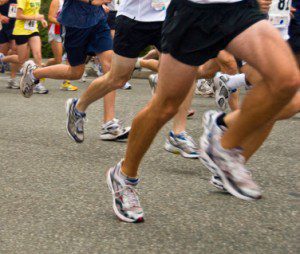 Yesterday my husband and I woke up early to partake in an annual tradition: cheering on the runners and walkers in Cincinnati’s Flying Pig Marathon.

We got to the race in time to catch the latter half of the first wave runners. These are the folks who look like runners, lithe of limb and fleet of foot. By the time they reached us, sitting under umbrellas in the rain somewhere around Mile 6, some of the first wavers didn’t even look winded.

Those people are like gods, but they do not inspire me.

My inspiration comes further in the pack. It begins toward the end of the second wave runners, the ones who are plugging along and appear to be reasonably experienced runners, but who have all kinds of body types. Here you start seeing  jiggly abdomens, gray hair, and camaraderie; whereas first wavers are entirely individualistic, eyes narrowed toward their personal best, second wavers start to get chummy. They love doing the run, but they want to experience it with the ones they love.

The most inspiring people are the third wavers, the ones who have never attempted a marathon before. Some of them come by in tears, not certain they can finish. Some are already limping and probably won‘t finish. As a spectator you feel compelled to call out to them based on whatever’s on their t-shirts: “Keep going, Xavier! Way to go, Anna and Christine! You’re almost at the halfway point!” (This last to a half-marathoner.)

The one that really choked me up yesterday was a young man who ran proudly with a jogging stroller. At first glance my thought was that he looked awfully young to have a child, and my second was that strollers weren’t allowed. As he got closer I saw that the stroller was occupied by a large school age child of about ten or eleven, head rolling with some kind of palsy. This guy was going to push that stroller for 26.2 miles so that his disabled brother or nephew or whoever he was could have the experience of running the race.

I cheered the loudest for them.

I don’t know what kinds of challenges and obstacles you’ve had in your life, and I certainly don’t want to resort to cheap platitudes about  how we all need to keep plugging along in the marathon of life. Blech. Still, watching the marathon each spring makes me think about the people in my life who have inspired me the most, both on the personal level (my mom) and the international (Nelson Mandela). They are people who faced down tremendous odds yet somehow managed to not only stay the course themselves, but to push the jogger stroller so that others could run the race.

So here’s the platitude: This week, keep plugging along in the marathon of life. No matter what.