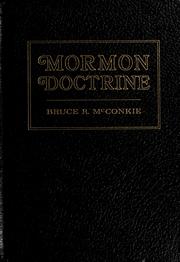 Last week marked the one-year anniversary of the quiet removal of Bruce R. McConkie’s compendium Mormon Doctrine from Deseret booktores. All references to it had already been expunged from the Gospel Principles manual brought back into use for priesthood and Relief Society in 2010. It is no longer officially recognized by the Church.

Like many Mormons, I have some personal history with this book. When I was baptized into the LDS Church in 1993, the father of a friend gave me a copy , carefully inscribed to congratulate me on this momentous step. It looked like a helpful resource with its A to Z organization and comprehensive explanations. I was pleased to have it.

But then a friend quietly took me aside, looking fairly constipated with anxiety.

“I know you, and I know you’re actually going to read that book,” she told me. “So I wanted to tell you that just because it is called Mormon Doctrine, and it was written by a general authority, doesn’t mean that everything in it is really what the Church teaches now. If you have any questions about anything, anything at all, just come and ask me.”

This was confusing. This hyper-orthodox Molly Mormon friend was telling me, in her gentle Utah woman’s voice, that a Church general authority was not quite trustworthy as a source of information about the Church. Interesting.

Boy, was she ever right. When I read the book I found numerous passages I considered offensive, and others that seemed flat-out wrong in their interpretation of the Bible. I was grateful that she had taken the time to warn me and to teach me a valuable lesson: just because something has the veneer of authority does not make it authoritative or true.

I was very glad to hear the news a year ago that the Church had finally begun to officially disassociate itself with the book. Yet I still worry that the book lives on like that stubborn, garrulous old great-uncle you try to avoid at family reunions. It’s given enduring legitimacy to McConkie’s racism, sexism, and strange interpretations of the Gospel. (Check out a first edition to see his rant about psychology as a tool of the devil. It’s seriously trippy stuff. That was later removed, along with many other things.)

It’s not like various leaders of the Church haven’t tried their best to downplay the reliability of this book. When it was first published in 1958, its appearance was news to the prophet, David O. McKay, because McConkie – then just a member of the Council of the Seventy – hadn’t bothered to tell the First Presidency his plans to publish a book claiming to be an encyclopedia of Mormon doctrine. Whoops. McKay and two other apostles (including Marion Romney, Mitt’s dad’s cousin) spent over a year studying the book and compiling a report of the – wait for it – 1,067 corrections that needed to be made. The First Presidency ultimately recommended that the book not be given a second edition at all; it was too full of errors and had been “a source of concern to the Brethren ever since it was published.”

But the Mormon people apparently loved it, and six years later McConkie lobbied the ailing prophet for a second edition. It is not clear that McKay ever authorized it to be published under Church auspices, but McConkie moved forward anyway. (The McConkie family disputes this last claim, and if documents are added to the historical record that demonstrate McKay’s approval of the project, I will stand corrected. I have not yet seen any such evidence.)

Whether the second edition was authorized or not, the book’s success is history. It was  a top backlist performer for Deseret for half a century, even after the Church tried several years ago to supplant Mormon Doctrine’s monopoly on the easy-to-use dictionary format with the handy (and free!) little A-Z reference book True to the Faith. It helped some, but not entirely.

There will probably never be an official repudiation of the book. It’s not seen as good form for general authorities to rebuke one another; they’re much too nice for that nowadays. But at times it would save us all a lot of anguish if they would just stand up in General Conference and shout, “Elder so-and-so, your book was full of crap!” This kind of thing was done routinely in Joseph Smith’s day. Then he’d excommunicate everybody, they’d say they were sorry and request rebaptism, and they’d all sit down to fried chicken. It felt good to clear the air.

McConkie is long dead now – and, to be fair to him, he did issue the equivalent of an “I’m full of crap” statement after Spencer W. Kimball’s 1978 revelation on blacks and the priesthood. At that time, McConkie encouraged Latter-day Saints to forget everything he’d ever said about race and people of African descent, since the Church now had further light and knowledge on the subject.

The trouble is, some didn’t forget. Now, with his book finally off the shelves and lacking the Church’s seeming imprimatur, perhaps they will.

Psalms for When Your Life Completely, Totally, and Utterly Sucks
archives most recent
More from Beliefnet and our partners
previous posts