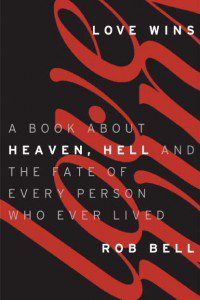 Rob Bell is my kind of heretic.

His new book Love Wins: A Book about Heaven, Hell, and the Fate of Every Person Who Ever Lived has been loudly branded as heresy by fellow evangelicals Mark Driscoll and John Piper. That made me inclined to like it already, as Driscoll in particular has never been known for especially thoughtful or loving ideas.

Many Christians (including some who have not actually done Bell the courtesy of reading the book) have called for Bell to recant or further explain his views—because apparently, putting your ideas in a 224-page book is not yet clear enough.1

Even Relevant magazine, in a balanced, tender and exemplary review, came away stating that Bell’s views on hell are based on “shaky foundations.”

Of course they are shaky foundations—at least to those evangelicals who have been steeped in the notion that a loving God is fully capable of consigning the vast majority of the human race to eternal damnation. (Plenty of evangelicals, like Bell, do not believe this.)

But to Mormons, many of Bell’s ideas about hell will sound quite familiar.

The Mormon emphasis on universalism is one of the points of LDS theology that many outsiders don’t realize or understand. (One of my few criticisms of the new Book of Mormon musical, for example, was its inaccurate portrayal of Mormon views of hell; see here for my review of the show and here for my interview with one of its creators, in which I ask about the “Spooky Mormon Hell” song from the musical score.)

Mormons have always believed in a God who refuses to dispatch anyone to an everlasting hell, which is a critique Bell makes again and again of traditional evangelical views. (Bell asks us which is “more terrifying to fathom: the billions who burn forever or the few who escape this fate?”) In this way, Mormon universalism is not unlike the universalist views that swept the early American nation in the generation before Joseph Smith. Clearly, Smith imbibed the waters that had also nurtured earlier New England universalists like Charles Chauncy and Benjamin Rush.

Like some of that generation, Mormon theology also embraces the idea that this short human life is not our only chance to make decisions that may affect eternity. After this life, people who never got the chance to hear God’s good news, or who rejected God for reasons that made perfect sense at the time, will have the opportunity. And in Mormonism, everyone means everyone, from serial killers to soccer moms. The Mormon God is a god of second, third, and fourth chances . . . unto eternity. That doesn’t necessarily mean that punishment for sin does not exist—the 18th-century Universalists entertained the idea of a temporary “hell” that would purge evil and purify a person to dwell with God, and Mormons speak of a comparably short-lived “spirit prison” in which individuals may learn, repent, and eventually cross over into paradise.

Bell arrives at a similar place when he speaks of the possibility that all people have the chance to move from “judgment to restoration, from punishment to new life,” even after death. No one is cast off forever, and God, says Bell, is prepared to work on human hearts for “as long as it takes.”

I hope that plenty of Mormons read Bell’s book. It’s accessible and concise, and truly funny in places. At times, it’s even prophetic, calling people of faith to repent of one of the greatest idols of the age: religious complacency. Here Mormons might stop patting themselves on the back that an evangelical megachurch pastor has come around to “their” POV about hell and take a long, hard look at their simplistic ideas of heaven.

It’s critical to scrutinize beliefs about the afterlife—in the end, what we believe about heaven and hell reflects what we believe about God. Where Mormons have gotten it right, I think, is that the plan of salvation is “God’s plan for happiness,” and that heaven will resemble life here, only better. We will enjoy the continuation of family ties and friendships; the earth will be made new; we will have resurrected bodies. As Bell points out, a worldly approach to heaven is surprisingly biblical; the prophets speak of the coming age as one filled with feasts and homes and grain for all. It is, literally, heaven on earth.

Where Mormons have erred, and erred egregiously, is in blindly failing to realize that God did not only intend heaven to resemble life here—but for life here to resemble heaven. Our task as Mormon Christians is not to ensure that we and all other human beings “go to heaven,” as though heaven were entirely removed and far off. Instead, it’s about dragging the heavenly future into the earthy present. We follow the commandments not because doing so will earn us frequent flyer miles for a nonstop postmortem evacuation flight to heaven, but because doing so equips us to serve God’s children right here, right now, in the refugee camp that is this world. Bell writes:

It’s very common to hear talk about heaven framed in terms of who “gets in” or how to “get in.” What we find Jesus teaching, over and over and over again, is that he’s interested in our hearts being transformed, so that we can actually handle heaven.

Bell’s book presents an unwavering emphasis on the kingdom of heaven as something that begins in the here and now. This is something that Joseph Smith understood intimately but that contemporary Mormons, whose pastel imaginings of heaven sometimes appear to stop with the blissful reunions of their own eternal families, have largely forgotten. The kingdom of heaven is not a vacation spa located somewhere else in a future, postmortem time. It is to be built here and now, brick by brick, by people committed to God’s justice. Some of those people will be Mormons, and many more will not.

1 To be fair to the critics, Bell’s book, for all its strengths, is not particularly thorough on the idea of hell in the Bible, church history, or theological traditions. Evangelical readers who want more in-depth theological and biblical explanations of hell by two of their own should look to Sharon Baker’s excellent recent book Razing Hell and N.T. Wright’s Surprised by Hope.

read next post
This Week in the Twible: Psalms to Fling at Enemies
archives most recent
More from Beliefnet and our partners
previous posts