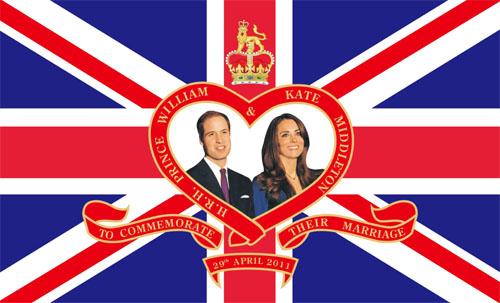 3:37 a.m. Aaaaugh! Insomnia again. Well, at least there’s something interesting to watch on TV. Forget about my plans to TiVo the royal wedding and see it tonight. Now I will be watching with millions of other people! It’s, like, a religious experience!

4:02 a.m. Barbara Walters just informed me that there 775 rooms in Buckingham Palace, and 78 bathrooms.

4:03 a.m. Diane Sawyer looks a lot more chippper this morning than she was last night when she covered the tornado rampage across the South. It must be head-whippingly schizophrenic to be a news anchor.

4:03: Well, that didn’t take long. We’re only three minutes in and we have a first reference: Kate will never be a commoner again! According to the NPR royal wedding drinking game, everyone takes a drink, probably the first of hundreds. Mine will be herbal tea. I have to teach today.

4:05: That didn’t take long either: Headline is “Mum would be so proud.” She would have been 50 in July. Diana, of course. Everybody take another drink.

4:14: Let the red carpet fashion critique begin. Whoo hoo, is that a hat on your head or are you just happy to be on TV? According to the British commentator, you have to be “really, really posh” to get away with hats like that.

4:17: Here’s a woman who got the posh memo . . . David Beckham and a beautifully pregnant Posh Spice!

4:18: Kate’s local butcher, yoga instructor, and pub owner have all been invited from Bucklebury. See, the royal family does love commoners. Aaaaaaaaw.

4:22: How much would it cost to air a commercial during the royal wedding?

4:26: Barbara speculates about Kate’s hair. Will she do an upsweep? A tiara? Why am I still watching this?

4:27. Robin says that Diana was barely 20 years old when she got married. But wasn’t she just 19? No matter; it’s time for another drink.

4:28: Did we mention that Kate is a commoner and her parents only just met the queen for the first time? If this keeps up I’ll be up to my second cup of tea.

4:33: More commercials already? Well, time to reflect on royal weddings. I do feel nostalgic, even though I didn’t want to be awake just now. In 1981 a friend stayed over at my house and we woke up at some ungodly hour to watch Princess Diana get married. I loved it all.So now it’s tradition. I need some more tea.