I was prepared for scatological humor, generous doses of the F word, and off-color bawdiness—this is South Park without network censorship, remember?—but I wasn’t prepared for my Mormon faith to be lampooned with any sensitivity. I was happy to be wrong. 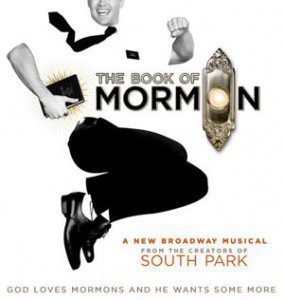 “Jesus sounds like Kenny,” my friend Donna whispered at the start of Book of Mormon: The Musical, which is still in previews but already a smash hit on Broadway.  That triumph is not surprising, since the musical was co-written by Trey Parker and Matt Stone, the creators of South Park, and Bobby Lopez, the writer for Avenue Q, one of my favorite musicals of all time. (And guess what! We’re going to run a Q&A with Bobby Lopez this week, talking about his curiosity about Mormonism.)

I was prepared for scatological humor, generous doses of the F word, and off-color bawdiness—this is South Park without network censorship, remember?—but I wasn’t prepared for my Mormon faith to be lampooned with any sensitivity. I was happy to be wrong.

I had bought tickets for Tuesday’s performance back in January, advance planning that turned out to be a good thing. A few days before we attended, Jon Stewart cemented the production’s bright future by raving about it for a full seven minutes on The Daily Show. Stewart told Stone and Parker, “You have somehow managed to satirize religion while simultaneously almost celebrating it in this sweet, yet really hard-edged [way].” Needless to say, the theater was packed.

Despite the production’s title, the musical has very little to do with the scriptural Book of Mormon. There are a couple of framing scenes in which we see golden plates being buried in “ancient upstate New York.” We have brief glimpses of Mormon and his son Moroni (who shows up with great hilarity later in the musical as something of a disco star). Then the opening song is an up-tempo, doorbell-ringing number with ten male missionaries proclaiming, “This Book Will Change Your Life.” They are excited, thrilled to be getting their mission calls, and dreaming aloud about where in the world they might be sent. They know that serving a mission is their calling because “God loves Mormons, and he wants some more!”

The companionship we follow is that of Elder Price, the quintessential Eagle Scout who is earnest about his faith but also deeply self-absorbed; and Elder Cunningham, who is just . . . weird. He’s a follower, a science fiction geek, and something of a pathological liar. Mostly he wants to be accepted and to have a best friend for the first time.

The elders are sent not to Orlando, Elder Price’s dream destination, but to Uganda, where they are immediately robbed. When the locals burst into a song with a “Hakuna Matata” feel, Elder Cunningham enthusiastically joins in, only to learn that what they’re really saying is “F you, God.” The Ugandans are sick of the wars and diseases that ravage their lives. Eighty percent of the people have AIDS, and as one character keeps reminding the audience in one of the show’s running gags, there are maggots in his scrotum.  Where is God in their suffering?

Although the show has some decided stereotypes, they’re not of Mormons so much as they are of east Africans. Uganda is depicted as an entirely rural place, where many people still practice female genital mutilation (which is actually illegal in Uganda) and no one has a cell phone or access to the outside world. (In reality, between one-third and one-half of Ugandans have cell phones.) The locals’ only information about Mormonism therefore comes from the elders, especially Elder Cunningham, who steps up to leadership in Act I’s concluding song “Man Up!” after Elder Price burns out in frustration. However, Elder Cunningham’s tendency to embroider the truth comes out in his determination to make the Book of Mormon relevant to the Ugandans’ lives and problems. His portrayal of Mormonism, with its liberal borrowings from Star Wars, Star Trek, and The Lord of the Rings, results in a fabulous uptick in baptismal rates (and what may be the world’s first sexually suggestive baptism song). Such success attracts the attention of the buttoned-up mission president, which leads to a scene of wildly comical hijinks and a crisis of faith.

In the end, the musical has some very positive things to say about Mormons, who are depicted as naïve but committed to helping everyone they can and trying to improve their corners of the world. There are some missteps, to be sure. The song “Spooky Mormon Hell” is hilarious (check out the life-size dancing Starbucks cups; I could not stop laughing) but theologically inaccurate. Although Mormons believe that a tiny fraction of humankind may spend eternity in outer darkness, it’s nothing like the Jonathan Edwards-styled fire-and-brimstone hell depicted in Elder Price’s nightmare.

Where the show really nails Mormonism is in the ballad “I Believe,” sung by Elder Price when he remembers his call to serve and decides to head back to the mission field. “I am a Mormon, and a Mormon just believes,” he croons. This brilliant song is at once a mockery of the genre of the inspirational ballad and an affirmation of the choice to remain Mormon despite the apparent irrationality of some of the religion’s beliefs: “I believe that in 1978, God changed his mind about black people!” Elder Price sings. “I believe that God is on a planet called Kolob!”

The production closes with a demonstration of Mormon commitment: although many other Christian missionaries have come and gone in the musical’s fictional village, the Mormons are determined to stick around and change the Ugandans’ social reality. They are not just passing out Books of Mormon, but standing toe-to-toe with warlords. In doing so, they bring hope. As one new convert sings, “I am a Latter-day Saint/ I help all those I can/ The only latter day that matters is tomorrow!”

It is an honor to be thus lampooned.

Did David Write the Psalms?
archives most recent
More from Beliefnet and our partners
previous posts