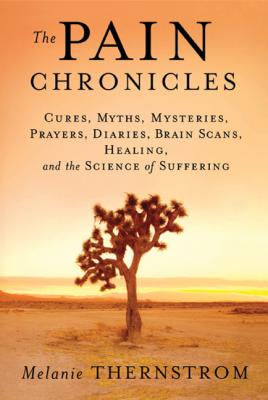 I’ve never had an experience of chronic pain, the kind where you want to die most of the time because your suffering is so terrible. I have had brief experiences with pain like that, like the time I decided to save money by having my root canal done by a dental student. Note to self: there are some things worth splurging on.

And here’s a book worth splurging on: The Pain Chronicles by Melanie Thernstrom, a freelance writer. She’s the kind of writer that other writers might like to hate, since she got something like a $367,000 advance for her first book when she was barely out of college.

But don’t be too quick to hate her. First of all, she writes gorgeously, and if this book is any indication, she spends a prodigious amount of time and energy on research. But she also has pain. Quite a lot of pain.

When she was still very young, maybe around 30, Thernstrom spent a day flirting with a guy and challenged him to swim across a lake with her. It was a wonderful outing, but it was also the beginning of her odyssey with pain. That night, she began to experience blistering agony in her neck, shoulder, and arm–a pain that she describes as having a sunburn from the inside out.

And it’s never really gone away.

The Pain Chronicles is far more than Thernstrom’s own story, however. It’s a romp through medical history, as we learn about diagnosis and treatment of pain through the ages. Lots of interesting tidbits here. One nugget that may interest Beliefnet readers is that anesthesia was around for decades before it found widespread use in surgery because–wait for it–Christian thinkers felt that it was evil to subvert the curses in Genesis 3 by allowing women to escape the pain of childbirth and men to circumvent any pain involved with earning a living. Thank you, Christians!

These early chapters had me cringing at various points, especially in French noblewoman Fanny Burney’s description of her anesthesia-free 1812 mastectomy. The procedure was performed by Napoleon’s own surgeon. (Why, by the way, do we say that surgery is “performed” with “instruments” in an “operating theater”? Why do we want it to sound like a symphony? Just a question.) Since this fellow once boasted of having performed 200 amputations in a single day during the Napoleonic invasion of Russia, you can imagine he tried to be quick. But the operation took twenty minutes, with Fanny feeling:

A terror that surpasses all description & the most torturing pain . . . when the dreadful steel was plunged into the breast–cutting through veins, arteries, flesh, nerves . . . I began a scream that lasted unintermittently during the whole time of the incision . . . .So excruciating was the agony . . . When the wound was made and the instrument withdrawn, the pain seemed undiminished . . . .

I just about had to stop listening to the audiobook at this point, but I’m glad I stayed with it. It’s a fascinating book, even beyond the historical description of the rise of medical science.

Much of the book undertakes the question of chronic pain. Why does acute pain sometimes morph into chronic pain, with the body attacking itself over months and years? Why and when does pain cease to be a symptom of a disease or an injury and become a disease in itself, an undesired permanent companion? Why do some people recover from terrible injuries, and feel no lasting pain, while in others (like the author herself, who finally gets a diagnosis of degenerative arthritis) pain persists, spreads to other parts of the body, and creates additional health problems?

Pain remains an underserviced discipline. I forget the stat she gives for the number of pain specialists compared to the millions of Americans who experience chronic pain, but it’s a startling discrepancy.

One thing I learned in this book is that there’s a legitimate gender and race bias to pain. While Victorian “science” has been ridiculed for its racialized approach to pain (they believed that people of African descent were hardiest and least likely to feel pain, which proved a convenient justification for slavery and performing medical experiments on blacks without anesthetic), race turns out not to be irrelevant in the question of chronic pain. The Victorians just had it backwards: in the U.S. at least, African Americans are more, not less, likely, to experience chronic pain. What remains unclear is why. Is it that socioeconomic factors control who gets early treatment, which is a factor in whether pain will become chronic? Is it that chronic pain is also compounded by other problems, such as stress and depression? Or is there an as-yet-unidentified biological component?

There are more questions than answers in The Pain Chronicles, but it’s more than just a book of mild interest. I think it is going to help a lot of people who have to live, day in and day out, with chronic pain and misunderstood diseases like fibromyalgia, to which Thernstrom devotes some good space. More power to her.

Christians Should Be Slaves: Guest Blogger John MacArthur
archives most recent
More from Beliefnet and our partners
previous posts