All your childhood, when people asked you what you wanted to be when you grew up, I’m guessing you didn’t say “slave.” But according to evangelical writer and pastor John F. MacArthur, that’s what every Christian should aspire to. It’s only because of a consistent mistranslation of the New Testament that we don’t know who we really are.

In his new book Slave: The Hidden Truth About Your Identity in Christ, MacArthur says that we’re not “servants” of Christ; we’re his slaves. We come into the relationship — a permanent one — with nothing.  You can watch the book trailer on YouTube. –JKR 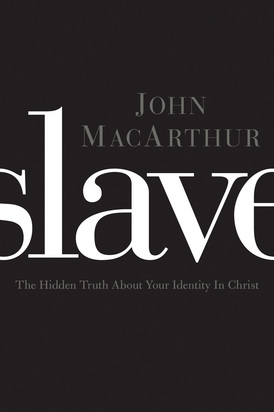 Slave: A Vital Truth That’s Been Lost in Translation

Have you ever thought about your relationship to Jesus Christ in terms of being His slave?

At first glance, that may sound shocking, especially in twenty-first century American culture. But for those in the early church, it was a fundamental part of their identity as Christians. They saw Jesus Christ as their Master (or “Lord”), and viewed themselves as His slaves.

We are familiar with many of the terms the New Testament uses to describe us as Christians. It depicts us as aliens and strangers, citizens of heaven, and lights to the world. We are heirs of God and joint heirs with Christ, members of His body, sheep in His flock, ambassadors in His service, and friends around His table. We are called to compete like athletes, to fight like soldiers, to abide like branches in a vine, and even to desire His Word like newborn babies long for milk. All of these descriptions–each in their own unique way–give us greater understanding into what it means to be a Christian.

Yet, there is a metaphor that the Bible uses to describe believers more often than any of these. It is a word picture we don’t hear much about, yet it is absolutely critical for understanding what it means to follow Jesus.

It is the image of a slave.

So why don’t we hear about this concept in the American church today? The answer to this question is as simple as it is surprising. The Greek word for slave has been covered up by being mistranslated in almost every English version–going back to both the King James Version and the Geneva Bible that predated it. Though the word slave (doulos in Greek) appears 124 times in the original text, it is correctly translated only once in the King James. Most of our modern translations do only slightly better.

Instead of translating doulos as “slave,” these translations consistently substitute the word servant in its place. Ironically, the Greek language has at least half a dozen words that can mean servant. The word doulos is not one of them. Whenever it is used, both in the New Testament and in secular Greek literature, it always and only means slave.

While it is true that the duties of slave and servant may overlap to some degree, there is a key distinction between the two: servants are hired; slaves are owned. Servants have an element of freedom in choosing whom they work for and what they do. The idea of servanthood maintains some level of self-autonomy and personal rights. Slaves, on the other hand, have no freedom, autonomy, or rights. In the Greco-Roman world, to be someone’s slave was to be his possession, bound to obey his will without hesitation or argument.

For believers, the implications are clear. We were the slaves of sin. But when God rescued us, we became slaves to righteousness and slaves of Christ. We now belong wholly to Him. We are no longer our own. We are, as the apostle Paul says, a people for His own possession. But this kind of slavery is radically different. It is not drudgery, but delight. It is motivated by love, and it is the essence of true freedom. Moreover, it signifies the highest privilege possible. For God has not only made us His slaves, but also His adopted children and heirs.

Needless to say, something significant is lost in translation when doulos is rendered as “servant” rather than “slave.” Rightly understood, the slave metaphor represents a major paradigm shift, especially for many in the contemporary church. The gospel is not simply an invitation to become Christ’s associate; it is a mandate to become His slave.

Religion vs. the Individual in "The King's Speech"
archives most recent
More from Beliefnet and our partners
previous posts