The Secret of Happiness: Dan Buettner’s Research Sheds Light on How to Thrive 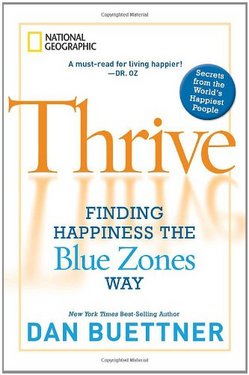 Dan Buettner made headlines with his book The Blue Zones, which looked at the longest-lived cultures in the world and the kind of life that contributes to living past 100. He noticed during that research that many of the world’s longest-lived cultures were also very happy societies. This led to a new research project called Thrive: Finding Happiness the Blue Zones Way, which has been featured in National Geographic and elsewhere.

The book’s premise is that there are certain “happiness hot spots” around the world, and that we can take cues from these cultures about what makes for a happy life. So in his travels Buettner visits Denmark (both Copenhagen and the Jutland area), northwestern Mexico, the city-state of Singapore, and San Luis Obispo, California.

These happiness hot spots are quite different from each other, but some universals apply:

Happy people are social people. In Buettner’s research, people’s reported happiness increases when they are involved in activities they enjoy doing with others, whether that’s a choir or a shooting club or a book group. Isolated people do not score well on the happimeter.

Happy people take vacations and don’t work too hard. In Denmark, hardly anyone works more than 40 hours a week, people get an average of six weeks of vacation annually, and the maternity and paternity benefits are out of this world.

Happy people trust others. One of the reasons Singapore
made the list (despite scoring lower than the other happy zones in
people’s self-reporting) is that the government there is squeaky clean.
There is no corruption. People trust the police, the government, and
their neighbors. In Denmark, honesty is taught from the cradle, and that
creates a culture in which a farmer can still put out fresh-picked
berries and a till by the side of the road and trust that people will
leave money for the fruit.

Happy people aren’t usually young and single, as is our stereotype, but middle-aged and married. And the very happiest don’t have children, a finding that has surprised many readers. Most people’s happiness takes a small dive when they have children.

Happy people get out in nature and enjoy physical exercise.
It’s no accident that the one place in the US that Buettner chose to
highlight is in California, where regular exercise and outdoor activity
is just part of the culture.

One of the things I enjoyed about the book was the armchair-travel
sensibility of hearing about how other nations have created policies
that are known to increase well being, whether it’s in SLO’s
determination to preserve green space or Denmark’s commitment to
allowing bicycle paths to criss cross its nation. Happiness is not
just an individual decision, although individual attitude is part of it.
A nation’s policies affect individuals and families.

It’s not a great book, however. It’s choppy and sometimes tends
toward the superficial. Buettner has a way of hanging out with the most
powerful glitterati in whatever culture he’s exploring, whether it’s a
barbecue with the Danish royal family or a heart-to-heart with a
Singaporean kajillionaire who made his fortune in cafeterias. There are some ordinary people here, but not enough.

More troubling is that the book subtly reinforces cultural and racial
stereotypes: Mexicans are lazy and don’t like to work hard, but they
sure know how to party. They are gullible and highly religious. Asians,
on the other hand, are hell-bent on material wealth and success, working
70-hour weeks and shopping like there’s no tomorrow.

It’s still an interesting book. You can go to Buettner’s website and take a quiz to find out where you rank on the happiness index. (I got an 8.5. Whoo hoo!)

From Holy Day to Holiday: A Q&A with Donald Heinz about Christmas
archives most recent
More from Beliefnet and our partners
previous posts