For Christmas this year, my daughter received a two-episode DVD of Little House on the Prairie Christmas shows. We watched one yesterday, and I was all a-blubber. Thanks to guest blogger Tania Lyon for reminding me of why I loved this series as a kid, even though, as she points out, the behind-the-scenes realities of the actors’ lives were a lot more colorful than families on the prairie. –JKR 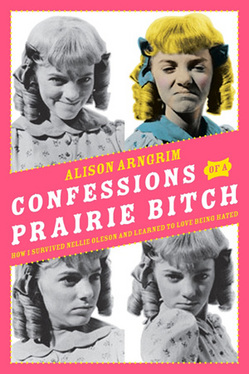 This summer, I wandered into an airport bookstore, picked up a pink hardback featuring a mean girl in blond ringlets, and read the first chapter of Alison Arngrim‘s memoir: Confessions of a Prairie Bitch: How I Survived Nellie Oleson and Learned to Love Being Hated. Then I went home and ordered a copy from my library. Because I am cheap like that. Also because I have always had a weakness for the TV show Little House on the Prairie. I had read all the books, but the TV show was special because I looked exactly like Laura Ingalls (aka Melissa Gilbert) at her age. The long straight brown hair, the freckles, the prominent nose, the tomboy manners; I had it all.

So even though I had never read a celebrity memoir in my life, I got sucked into Arngrim’s bittersweet wisecracking tale very quickly. It was astounding to read how many people Arngrim has encountered over the years who seem incapable of separating her from the character she played. The poor woman has been vilified her whole life, so bully for her that she figured out how to revel in it.

Part of her story was the dish on growing up in a show biz family (her mother was the voice of Casper the Ghost, among others) and the behind-the-scenes of the prairie. I learned that Michael Landon was a sex symbol who never wore underwear, who drank like a fish and smoked like a chimney, had a domineering temper you did not want to get on the wrong end of, and who left his longtime wife for Nellie’s stand-in. And Pa Ingalls was so wholesome. Sigh. I learned that Melissa Gilbert was a natural leader on the set and that Melissa Sue Anderson (who played Mary) was cold and disdainful. Turns out that in real life Laura (Gilbert) was the rich one and Nellie (Arngrim) was the poor one, and they were close friends.

The memoir might have been one long superficial gossip column if it weren’t for the depth of Arngrim’s struggle surviving years of sexual abuse from her older brother, a self-destructive teen actor. He raped her for years in their own home starting when she was only six years old. She finally learned that what he was doing was actually illegal and put a stop to it. Ultimately, Arngrim parlayed her fame as Nellie Oleson (and her “bitch” label) into a stand-up comedy routine and then a political platform from which to lobby for strengthening state child abuse laws concerning incest. That her “Little House” fame comes full circle to do some good gives the memoir a satisfying end. 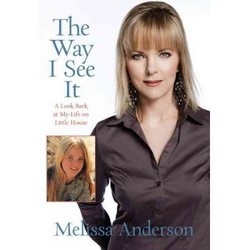 So I logged on to GoodReads.com to add my review of the book as is my custom, and up pops another suggested reading: The Way I See It, the memoir of Melissa Sue Anderson, who played Mary. I thought I was done with my little nostalgia fest, but since Anderson was the one actor that Arngrim effectively trashed in her book, I now felt a moral obligation to give Mary a fair hearing. So I did. And let me tell you–stick with Nellie. Melissa Sue’s narrative consists of blow by blow plot summaries of every episode in which she was prominently featured, a few shallow observations about her co-stars, and a litany of her post-Little House acting jobs. She sounds like the most boring celebrity on earth.

Of course, now I had to check, and yes, Melissa Gilbert had a memoir, too. I was in too deep at this point, and within days Prairie Tale was on my bedside table. Hoo-ee, this one is the dishiest. Gilbert was Hollywood royalty. Only the first half deals with life “on the prairie”– anecdotes about her relationship to surrogate father Landon and tidbits about the life of a child actor. The balance is about her tight but tension-filled relationship with her mother, the ridiculously long list of Hollywood bluebloods she made out with or slept with, her two marriages, and her addictions. The name-dropping was prodigious as was Gilbert’s self-absorption through most of it. At least, now I can say I know why Melissa Gilbert grew up to be so much more gorgeous than I–she got nose and boob jobs. 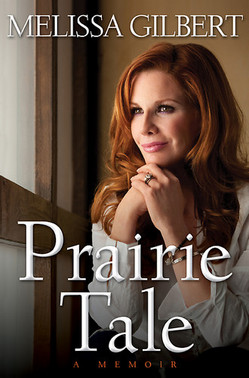 Whereas Anderson and Arngrim rode the periphery of a successful television series, Gilbert was the heart of it all and moved in headier circles. Her lip-locking included Tom Cruise, Billy Idol, Don Johnson, John Cusack, and a long, passionate on-again, off-again engagement to Rob Lowe that started before he made brat pack fame. She was at the center of the wild, cocaine-saturated, pre-AIDS, Hollywood VIP party scene. If you want to keep a sweet picture of “half-pint” in your head, don’t read this book. The partying combined with her melodramatic, adultery-filled, dysfunctional first marriage was not much fun to wade through.

It wasn’t until she achieved some stability in her second marriage, started attending AA meetings, and was elected as President of the Screen Actors’ Guild (which was badly in need of reform at the time) that I felt like the memoir recovered a sense of substance. It had just come a long way from the prairie, which is what I was really after. My husband had to put up with my endless spouts of Little House lore: “Did you know that Michael Landon actually blew up the Little House set when the series was cancelled so that NBC could never use it again in other productions?” Fortunately, he’s seen me go through these topical obsessions before and knows this too shall pass.

Meanwhile, all this time I’ve been checking out seasons of Little House and watching episodes with my two daughters, ages 6 and 9. I see them now with new eyes having read some of the back stories (like the 1st season episode that features a shockingly young Sean Penn as one of the schoolyard kids). And I watch my girls watch them with–well–new eyes. They have warmed up to the series slowly but steadily. One afternoon my 6-year-old and I watched the episode called “The Bully Boys” and it so terrified her she was sobbing and begging me to turn it off. So we decided to watch another episode to cleanse the palate that would surely be less scary called “Blizzard,” but in that one people were freezing to death right and left. Little House took on some rough stuff. Still, is there anything more heart-stopping than watching Pa go ballistic when it comes to protecting his family? What a man.

Watching with my kids, I don’t tell them how Mary was actually a snob, or that Pa really drank and swore or that Nellie had lost her virginity to her brother. I just tell them stuff like why Carrie falls down in the opening credits when the three sisters are shown running down the hill: her mother was rushed to get her daughter off to the scene call and accidentally put Carrie’s boots on the wrong feet, poor girl. They left in the face-plant because it looked so cute.

If there is one thing that all three memoirs heartily agree on it’s that Little House jumped the shark when the kids grew up and started marrying off, so if you’re planning a nostalgia marathon of your own, stick with the first 3-4 seasons or so. And please don’t tell me if anyone else has written a memoir about Little House–it’s time for me to move on. But if my journey down celebrity memoir lane has done nothing else, I am thrilled to report that my six-year-old picked up our paperback copy of Little House on the Prairie one night last week and has been reading it on her own ever since.

Christmas with Dietrich Bonhoeffer, Week 5
archives most recent
More from Beliefnet and our partners
previous posts