The Best Mormon Book of 2010: Grant Hardy’s “Understanding the Book of Mormon” 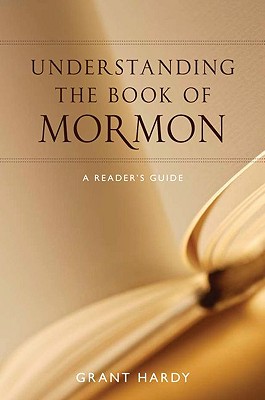 It’s Cyber Monday; do you know what you’re getting your favorite geeky Mormon for Christmas?

If not, let me make a suggestion: Grant Hardy’s Understanding the Book of Mormon, which came out earlier this year from Oxford University Press. It is quite simply the best book I’ve ever read on the Book of Mormon. (That includes the commentary I wrote myself, Selections from the Book of Mormon Annotated and Explained, which is more for beginners.) I also think it’s the best Mormon book published in 2010.

We’ve seen a couple of worthy studies of the cultural history of the Book of Mormon, the best being Terryl Givens’s By the Hand of Mormon. And plenty of books have focused on proving or disproving the historicity of the Book of Mormon, an apologetic exercise Hardy leaves to other scholars. His task is instead that of a skilled literary exegete: he wants to uncover what the layers within the book itself tell us about its characters, narrative agendas, and most importantly, its editors.

Hardy is the first to pay sustained attention to the important fact that the Book of Mormon was narrated by three very different people over a long history. He wants readers to understand these narrators’ equally different personalities and agendas. Nephi, fascinated by prophecy and his own role in its fulfillment, employed narrative techniques to privilege his —– by flattening the characters of his brothers, Laman and Lemuel (who, reading between the lines, sometimes come across as more caring and understandable than Nephi himself). Nephi’s theological concerns aren’t shared by the next major narrator, Mormon, who is neither a visionary nor a theologian. Whereas Nephi reread the Bible, particularly Isaiah, with his own situation in mind, Mormon saw himself as a historian and a moral guide (“thus we see”), leaving scriptural interpretation and apocalypticism to others. The tragedy of Mormon’s death contributed to the editorial concerns of his son, Moroni, a reticent author who created his slight record over 36 lonely years and focused more on the lost civilization of the Jaredites than on the lost civilization of the Lehites, of whom he was a lone survivor.

What I love most about Hardy’s book is its close attention to character and psychology. Its careful readings remind me of what Jack Miles did so well in God: A Biography.

This book is not for everyone. It’s not the best basic introduction to the Book of Mormon (for that, try Terryl Givens’s The Book of Mormon: A Very Short Introduction, also from Oxford), but it’s the perfect book for the seminary or Gospel Doctrine teacher who needs to delve deeper into the text.

And This Little Piggy Stayed in Babylon: This Week in the Twible, 2 Chronicles 34 to Ezra 3
archives most recent
More from Beliefnet and our partners
previous posts