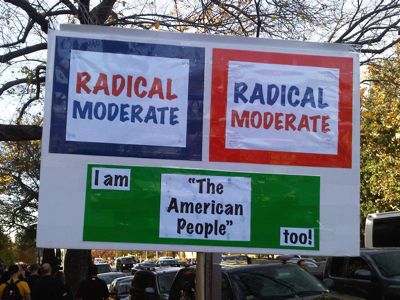 Friends, I’m in Atlanta for the AAR and so I wasn’t able to attend Saturday’s Rally to Restore Sanity. (My husband attended and sent me jealousy-inducing text messages from D.C.) In today’s post, guest blogger Elizabeth Eisenstadt Evans, who writes for the Philadelphia Inquirer and the Huffington Post, reflects on what the rally was able to “restore” in her own life–not just reasonable civic discourse, but something far deeper. –JKR

I’m still looking to find a reason to believe.

And though comedians Jon Stewart and Stephen Colbert didn’t save my soul, they may have, indirectly, provided a reason for hope.

You know the old truism about a skeptical, hard-bitten journalist – he (or she) is an idealist who has been mugged. As someone who also serves as an ordained minister in a shrinking denomination torn by infighting, I find cynicism too easily becomes my default mode.

The trouble is that my lineage, on my mother’s side, is redolent of passion for social change, humanitarianism and visionary activism. Why did I take my 13-year-old son if I didn’t believe, somewhere in my tarnished and dismissive heart, that rallies were somewhere in his future – and he might as well get to experience a hip one first?

But the “why are we here” question continued to bug me, right until we arrived at the Mall. What does it say about our political culture, I wondered, that hordes of people would come from all over the nation, without a vision or even a firm agenda, at the behest of two middle-aged comics? Are other jaded souls so bruised by the political upheaval of the last decade that they can only tolerate activism as satire?

In the absence of a hint from the Rally to Restore Sanity promoters that there would be anything spiritual or evocative of even pallid civil religion about the gathering, I arrived most uncertain of finding a spiritual hook.

In a moment of happy coincidence our hosts took us for breakfast to a restaurant where, in a basement room, representatives of “Faithful America” were welcoming members gathered for the rally. An online community that numbers roughly 100,000 members, the interfaith organization promotes grassroots activism on social justice and environmental issues. Spokeswoman Kristin Williams graciously agreed to let me know how her members felt after the event ended.

Judging by the signs, the huge crowd represented not only age diversity but a spectrum of interests. “Radical moderates” knocked placards with “Manatees for Sanity.” A man held up a bright orange sign that said “I see you went half black and you’re trying to decide whether or not to go back.” Other signs were more chiding: “Tea Parties are for little girls” and “Take it down a notch, Ms. Palin.” Pro-pot legalization advocates were prominent as was, apparently, the weed itself.

But overt religious references were rare – unless you count Stewart’s “We live in hard times, not end times.” Coming near the end, the rally’s most stirring moment was his reflection on the news-cycle-driven, polarized dogfight promoted by media on the left and on the right. While Stewart said that “if we amplify everything, we hear nothing,” the truth is that we live in an America in which those of opposing ideologies work together to get things done “every damn day.”

As true as his critique was, I saw nothing in it to restore my personal faith in democracy. The anti-Washington, anti-media critique he offered is common currency among conservative and liberal elites and activists alike. 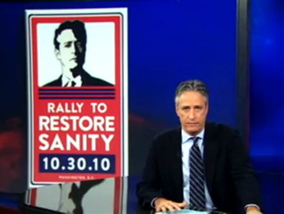 Seeking enlightenment (had anyone else experienced a moment of Stewart-Colbert revelation?) I turned to several passengers on the DCRally bus we took home. Was there anything spiritual about the experience for them? Describing herself as non-religious, Swarthmore College student Annie Myrvang told me that while she hadn’t known what to expect, it had turned out to be a great day, mostly because she felt a sense of being connected to others. Traveling companion and fellow student Dan Duncan seemed to feel that it was all a great lark – he’d come along for the irony and hadn’t been disappointed. A few rows down, renewable energy employee Katy Collardson said she’d enjoyed the opportunity to be with others seeking a “more compassionate and accepting” discussion of issues on the national stage.

It wasn’t until I spoke to Williams that my persistent unease about the purpose of the whole event both sharpened and, to some extent, resolved. While her members had been excited to come together to testify proactively to their own values, they weren’t waiting for a sign from on high to get on with it.

The rally wasn’t all about words of insight from the hosts, she said. Instead Stewart and Colbert, and the occasion itself, became “a powerful rallying force for people to assert their values. That’s what made people want to be a part of the event.”

The power of Faithful America, a post-institutional community driven by its members’ common passions and interests, isn’t bolstered artificially. It is organic, driven by the principles of those who want to make a difference in everyday lives.

If there’s a message of spiritual hope and of uplift for me in the aftermath of the rally, it is that simple. If the political and even the religious institutions within which we work are sick, we don’t have to continue to feel bound by them. Christianity will find new ways to be heard, even as a minority voice in a culture of competing gods. Men and women will find ways to reach across ideological divisions to help each other, regardless of what goes on in Washington or state legislatures.

Even if the institutions crash and burn, we still have each other – and the help of a merciful God.