Who Was Julian of Norwich? A Q&A with Author Amy Frykholm 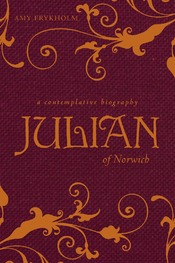 It turns out that I’m not the only one in the dark about this medieval saint. In this interview, Christian Century correspondent Amy Frykholm explodes some of the pervasive myths about Julian and helps us to understand Julian’s theology and visions.

Flunking Sainthood: I don’t know much about Julian, but I had always heard she was an aristocratic nun. You say that might not have been the case at all.

Frykholm: Right. In fact, I think the evidence points away from it. No one knows for sure, but there was an enormous explosion of lay writing in the late 14th and early 15th centuries. Lay people were taking on greater roles in the church and claiming their own spirituality. So there’s no reason to presume she was a nun. But there’s also the fact that Julian never mentions a convent, a religious order, or anything monastic in her book. Another reason was that she wrote this book for laypeople. Most books written by women in this period were for sisters or make a great deal of mention of convent life. She’s very clear that she’s writing for laypeople.

FS: So she probably wasn’t a nun, but you’re saying she was not gentility either?

Frykholm: I think that the demands on a noblewoman, and the separation between nobility and the people, would have provided a significant barrier for her to overcome. But we can imagine her as a parish elite, a merchant class or upper-middle class person of the time. She would have been someone who went to church with everybody else, rather than nobility who would have sat separately or even had their own church. Also, Julian received only one bequest from a nobleperson, and she situated herself at Saint Julians, a semi-industrial area where her neighbors were a tanner and a slaughterhouse. Noblewomen of the time would have situated themselves in much nicer places.

FS: So what is this book that Julian is famous for?

Frykholm: Julian’s book was A Revelation of Divine Love, and she called it “sixteen showings of the love of God.” It was an account of visions that she had when she was ill at the age of thirty. She spent the rest of her life wondering about these visions, which lasted for about sixteen hours.

FS: You talk about a “long text” and a “short text” of this book. What does that mean? 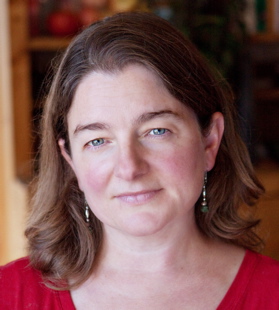 Frykholm: Within ten years of the visions, she wrote the short text. Over those ten years she had gained the skills and the courage to write them down. And probably she wrote the long text ten to fifteen years after that. It’s an elaboration of the same visions, but she introduces new visions that she says she had initially but was so baffled by that she didn’t put them in the first written version. In the later version, for example, she says that in a vision she learned that there was only one Fall–that Jesus and Adam fell together. And that Jesus is Adam and Adam is Jesus . . . in other words, that we are Christ and Christ is us.

FS: Whoa! My head is spinning.

Frykholm: It’s astonishing. She also elaborates on the idea that God is our mother is in the long text and not the short text. She says that God is both our father and our mother, and that God loves us with every kind of love there is, but that the love of the mother is nearest, readiest, surest. It isn’t like no Christian had ever said that God was our mother; Bernard of Clairvaux had said this. But her elaboration of it was probably pretty radical.

Frykholm: What’s also interesting is that in the long text it’s obvious how much surer and more confident she has become. In the short text she apologizes for being a woman and calls herself a wretch. She defends her writing because Jesus told her to write, but she also knows that she’s not supposed to. But in the long text, that kind of apology is just gone, and she speaks very confidently of her visions and what she has experienced. So one of the major questions of my book is how that transformation took place. It’s about gaining a voice, and having the courage to say more.

FS: So, why is the life of a medieval woman relevant to us today?

Frykholm: My experience is that for myself, and for many people that I’ve encountered, Julian speaks so clearly of something we somehow fail to understand, which is that God actually loves us. The fact that she speaks that in the midst of really intense suffering, in a world that rejected that view of love, gives us permission to believe it for ourselves. We’re held by God – “enwrapped” is the language she uses. Jonathan Hartgrove said something interesting about this in Christianity Today, which is that in our contemporary world we try so hard to avoid suffering. Our lives are so comfortable and easy compared to people in the 14th century. We tend to look away from suffering, when something is too painful to see. Julian gives us a powerful example of taking in the suffering of others as a path to love. To her, that’s what the crucifixion is – a willingness to look deeply at suffering, and even a desire to share in it.

FS: To beg for suffering . . . Nope, I’m not signing up for that anytime soon.

Frykholm: One of the big issues here is that Julian lived in a time of plague. When she was six years old, 80% of the population of Norwich died. The world that she inhabited was essentially erased. Traces of grief and sorrow would have remained, but maybe they weren’t named. The second round of plague came when she was nineteen. The second round took 80% of the children, because any adult who had lived through the first plague now had some immunity. If Julian was a typical 19-year-old woman in this time, she would have been married with children. I think she lost her children in the plague because she writes later about a time in her life when she had been so sad that she wanted to die – all that was “here” was woe, and all that was “there” was well. And there are other clues in the book that hint that the plague is at play in her work–seeing a body in a stinking heap of mire; seeing a vision of a child emerge from that stinking heap pure and clean and well.

FS: At Flunking Sainthood we celebrate the frail humanity of people on the spiritual path. Is there any way in which Julian of Norwich was a screw-up?

Frykholm: I was interviewed by this Christian radio station in Pittsburgh, and the woman said to me, “Your account of Julian seems so messy. Were you ever tempted to clean it up?” I laughed because I thought I had cleaned it up. I think she was a woman who wasn’t doing what a medieval woman was supposed to do. At the end of her book she says something beautiful about error, this sense of “If I put all my errors out here, if I take this risk of writing this book, then all my errors will be evident for everyone to see.” She saw that her sin and failing could not impede God’s work. 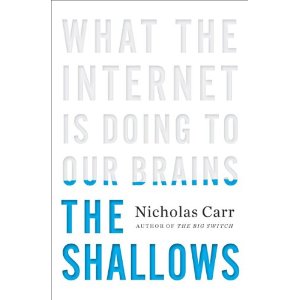 The In-Box That Ate Manhattan: Setting Limits for Facebook, Twitter, and Email
archives most recent
More from Beliefnet and our partners
previous posts