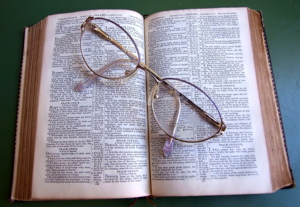 Recently at my church, the regular adult Sunday School teacher was on vacation and the assigned substitute was ill. I offered to substitute and was handed a lesson plan just before I walked in to class. Obviously, there wasn’t a lot of time to prepare, so I had to wing it by primarily giving an overview of kingship in the Old Testament. Thank God for the Twible!

I say that not because I actually taught from the Twible (which would likely have resulted in the recruitment of Teacher #3) but because going through the whole Bible has taught me more about “the big picture” than I ever expected. It’s not like I was a neophyte to the Bible; I’ve been a Christian for many years and even went to seminary to study to be a pastor. But I’d never read the Bible cover to cover; I’d simply replayed its greatest hits.

Apart from creation, there are three great themes in the Old Testament, themes that reverberate through all the books and all the centuries:

We’ve already been through the Exodus, and in Joshua, Judges, and Samuel we saw the story of Israel’s rise from a ragtag band of contentious clans to a powerful nation under Saul and David.

In Kings we’ve read the story of that nation’s dissolution: first the splitting of the United Kingdom into North and South, and then the series of mostly nasty kings in both regions who made their nations vulnerable to attack.

In the next couple of weeks we’re going to see how the Exile occurs. The South (Judah, which includes Jerusalem) manages to hold on for almost 135 years after the North is destroyed, but the clock is ticking. Here’s a rough chronology:

722 B.C. Assyrians sack the northern regions & depose Israel’s king (2 Kings 17). Northerners scattered to the winds. Assyria slowly “resettles” Israel with its own people, resulting in “Samaritan” half-breeds that are despised by Jews.

621 B.C. After a slew of bad kings, the South’s righteous king, Josiah, rediscovers the Book of Deuteronomy in the Jerusalem temple and tries to reform society according to its laws (2 Kings 22-23). Exile’s averted for another few decades until . . . .

I never realized before how foundational the Exile is in understanding the entire Bible. In the coming weeks I’ll discuss this in more specific posts (Who are the ten lost tribes? Why do Jews “have no dealings” with Samaritans?), but for now let’s just try to understand the big picture.

Sat 8/28
#Twible 2 Kgs 5: Elisha has no Magic Leprosy Wand? Naaman’s ticked. But after washing 7x, he’s a convert. Bonus: he gets to keep his nose.

Mon 8/30
#Twible 2 Kgs 7: Turnaround! Arameans sent packing; Isr has plenty to eat; Elisha back in good graces. Wait, is that the other shoe dropping?

Who Was Julian of Norwich? A Q&A with Author Amy Frykholm
archives most recent
More from Beliefnet and our partners
previous posts