“But there were female prophets in Old Testament times,” I insisted. I was in the middle of an uncomfortable conversation with a fellow Mormon who had just made the claim that all prophets had always been men.

“Well, no, not really,” he countered. “Women could be advisers, like to a king, but they were not true prophets. That is an ordained priesthood calling, and women don’t have the priesthood. Sometimes, women in the Bible were pressed into service when there wasn’t a priesthood holder available. Those were special circumstances.”

“Women don’t have the priesthood in our church today,” I sputtered. “You’re throwing today’s practice from one religion back on the Old Testament and claiming that things have always been the way they are now. The text itself does not support that view.”

So, for the record: Five women in the Hebrew Bible/Old Testament are explicitly called prophets (though Jewish tradition also recognizes a few others): Miriam, Deborah (see related post), Huldah, Noadiah, and Isaiah’s unnamed wife. In the New Testament, only Anna gets this designation. Here’s how to recognize a prophetess:

1) They begin their pronouncements with “Thus saith the Lord.” That’s a major clue.

2) The text describes them with the word navi’a, the female form of the word navi, which means prophet or spokesperson. Literally, it is one who speaks for God.

3) They recognize truth, e.g. Huldah verifying the authenticity of the Deuteronomy scroll discovered in the Jerusalem temple, or Anna verifying the identity of the baby Jesus.

4) They offer God’s revelation to an entire nation.

And in direct rebuttal of my interlocutor’s assertion that women were only pressed into prophetic service when there was no man around to do the job (!), look at Exhibit A this week. King Josiah specifically requested the prophetess Huldah even though other big-name male prophets, like Jeremiah, Habbakuk and Zephaniah, were also on the scene in Judah at the time. Harrumph.

Mon 9/13
#Twible 2 Kgs 21: Manasseh=Worst. King. Ever. Which is especially bad since he reigned for 55 yrs. Child sacrifice & the whole enchilada.

Fri 9/17
#Twible overview of 1 Chronicles: 1 & 2 Chron a remedial OT overview in case u were sleeping. Pomo retread of same stories from other POVs. 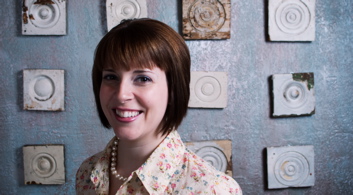