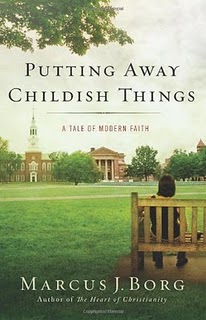 Marcus Borg opens his first novel, Putting Away Childish Things, with an admission: it’s going to be didactic. He sees it as a teaching novel, “the only kind of novel [he] can imagine writing.” He goes on to disarm the critical reader by admitting that he lacks “a novelist’s imagination and gifts” and says that if he weren’t already a well-known biblical scholar, this whimsical project might never have been published at all.

So before the novel has even begun, the author has anticipated potential reviewers’ main criticisms and deftly deflected them. He’s aware that the book is not plot-driven; it’s not character-driven. It’s message-driven. And that’s not good in fiction, because the message, if there is one, should always be subordinate to the story. That’s unfortunately not the case here.

Borg’s main character is Kate Riley, a New Testament scholar like himself, who teaches at a Beloitesque small liberal arts college in Wisconsin. The novel opens just before winter break, with Kate eagerly anticipating the holiday respite but also gearing up for a series of radio interviews to launch her new book, which compares the birth stories about Jesus in Matthew in Luke.

Through these radio interviews, Kate starts getting into hot water at the college. Her senior colleagues think she has “sold out” and traded in objective biblical scholarship for popular writing. Some parents who hear one of the interviews (which is demonized by a Glenn Beck-like talk show host) start a petition to deny Kate tenure because if she’s challenging the authenticity of the biblical infancy narratives, she’s not Christian enough. Other parents think Kate is too Christian and don’t want a “religious lunatic” teaching their kids. Things come to a head when Kate takes the unusual step of applying for a one-year teaching appointment at a seminary.

Although the book explores some of the great religious and political conflicts of our time, it’s too bogged down in lectures and “teaching conversations” (about poverty, homosexuality, biblical inerrancy, and the like) to have much of a plot. Classroom scenes abound. The central conflict of the book is whether Kate will get the one-year job and whether she will be able to return to the college when the year is over, and frankly, that’s not a lot for readers to go on. The novel is every bit as didactic as Borg warned us at the outset.

Yet it’s still a reasonably interesting book. What surprised me most about the novel is that although it is didactic, Borg has some promise as a novelist. He has a wonderful eye for detail and doesn’t pass over the critical tiny particulars that make or break a scene–characters’ longstanding habits, facial expressions, food tastes, clothing. He doesn’t often succumb to the rookie mistake of telling rather than showing. His use of language is promising, and if you remove the lecture scenes, he knows how to pen believable dialogue.

In the end, it’s the kind of novel where you underline teaching points that have been made especially well and dog-ear the pages in which the author has included poetry that speaks to urgent human questions. However, it’s not a novel you return to because you’ve fallen in love with a character or a place. It preaches to the choir, to those Christians who are like Kate–and like me–in questioning the literal character of the Bible while also maintaining a vital faith.

Dear Chelsea Clinton: Unsolicited Advice from the Trenches of Interfaith Marriage
archives most recent
More from Beliefnet and our partners
previous posts