It’s been an exciting week for the Twible. Thanks to an article in the Guardian on Sunday, there are new Twible fans in far-flung places like New Zealand, Taiwan, the Netherlands, Australia, Bhutan, the UK and the Czech Republic. Welcome to the Twible community, all!

Also, @Zeus_Olympios is following me on Twitter. I guess they read the Guardian even up there on Mt. Olympus. Of course, the gods probably have massive fights over who gets to read it first. 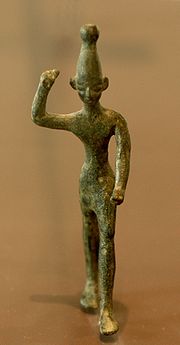 And speaking of gods who get into tussles . . . last week we saw the Israelite prophet Elijah bring it on with the 850 prophets of Baal. This week, Elijah got sucked up to heaven in grand style, but not before he passed on the reins to his protégé, Elisha. (Note to biblical writers: you really need to get some additional monikers in the biblical name pool.)

Both Elijah and Elisha stepped right into the whole “Baal vs. God” war. So who was Baal, exactly? In 2 Kings 1, he’s actually called Baalzebub, which means “lord of the flies.” I never knew until this week that the title of William Golding’s novel was a biblical allusion. Like the novel, which shows that all human beings have the capacity to turn evil given the right conditions, the god Baal preyed upon some real nastiness. Like the sacrifice of children. Here, little Piggy . .

Apparently there are almost 90 references to Baal in the Old Testament,
which shows how important he was as God’s #1 competitor. In 1 and 2
Kings, we see the spectacular demise of some of the monarchs who try to
convert the people back to Baal worship from good new-fashioned
monotheism. People like Queen Jezebel, who winds up as Pupperoni, or
King Ahaziah (2 Kings 1), who makes the mistake of calling on Baal
instead of God to find out if he’ll heal from a fall.

It’s a little weird to me that Ahaziah would call on Baal in those circumstances. I mean, the god of the Israelites was your basic one-stop-shopping God, right? He’s the deity you go to for physical maladies, battle strategies, sex advice, the works. But in Canaanite religion, calling on Baal when you’ve fallen down is like beseeching Aphrodite when you actually need an orthopedic surgeon. Baal’s bailiwick was fertility, with a minor in storms. What kind of idiot king would call on Baal just because he’s fallen down? Wimp.

Part of the answer lies in who is telling this story, when it’s being told, and why. Apparently the über-god we call Baal was an amalgamation of a whole lot of persistent local Canaanite deities. The Israelites who recorded this history (centuries after it is supposed to have happened) missed a good deal of the nuance and lumped any non-monotheistic worship together with Baal. And obviously, they didn’t like him much, so the Bible’s account of Baal worship isn’t the most impartial.

Fri 8/27
#Twible 2 Kgs 4: Elisha multiplies oil, purifies food, & feeds the poor. Can we hire him as a consultant on Middle East & the environment?

Join us at Flunking Sainthood every Friday for Twible commentary.

Why Are Jews Funnier Than Christians?
archives most recent
More from Beliefnet and our partners
previous posts