Yes, Robert Pattinson, There Really Are Mormon Themes in “Twilight” 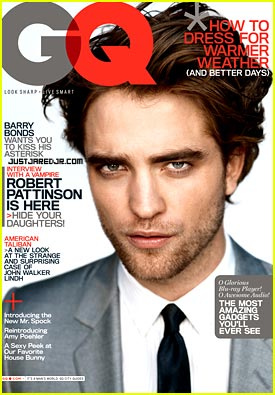 I hate to disagree with Robert Pattinson. He’s just so darn beautiful. But when His Hunkiness goes public with ignorant statements like the following, I have to beg to differ. And hope that he won’t crush my skull.

“I think people make up all these Mormon references just so they can publish ‘Twilight’ articles in respectable publications like the New York Times. Even Stephenie said it doesn’t mean any of that. It is based on a dream.”

Apparently Pattinson is worried that if the Twilight series is dismissed as being infused with Mormonism, the Eclipse movie will only take in $295 million in domestic box office instead of the $296 million that New Moon sucked out of fans.

OK, Robert Pattinson, here’s a reality check: Yes, the Twilight books were conceived in a dream that Stephenie Meyer had about a vampire named Edward (that’s you!) and an ordinary girl talking in a meadow. But so much else about the series is decidedly Mormon that to claim that people “make up” Mormon references is just silly. What’s buried deep inside any good novelist is going to “out” whether the writer intends it to or not. That has clearly happened here.

The Religion News Service ran a pretty good article about the Mormonism-Twilight connection last week. Although the first few points (like the fact that Bella doesn’t drink alcohol, remains a virgin until marriage, and doesn’t want to abort her unborn half-breed) are superficial, some of the others get to the theological heart of Twilight‘s Mormon roots. Here are a few quotes from the article:

To those points we could add a few more. In an article for BYU Studies and Mormon Times that I wrote last year (summarized here), I argued that the overall theme of Twilight corresponds with one of the crucial issues in the Book of Mormon, which Stephenie Meyer has identified as her favorite book. That issue is overcoming the “natural man.” Edward Cullen is literally carnal. He has to make the decision every day to overcome his nature and be selfless and good–what the Book of Mormon argues is the challenge of every person. The natural “man” (or woman, or hottie vampire) is an enemy to God and has to be put off in favor of struggling for holiness. (Mosiah 3:19)

Edward’s journey is made possible through exercising his agency, another key doctrine that, while hardly unique to Mormonism, is fully developed there. Agency is a radical freedom, the ability to choose one’s eternal destiny and not be defined by whatever path seems laid out by circumstance. Edward’s natural tendency is to be a vampire, but he knows he can be much more. He can be loving and good. (Well, except when he’s not in one of his mercurial fits of inexplicable rage for which Bella winds up apologizing. You can’t have everything. But this is Flunking Sainthood, where we extend grace even to the moody undead.)

Yes, Robert Pattinson, there are Mormon themes in Twilight. Fans sit enraptured as Bella continues her quest to be part of an ideal LDS family that mates for eternity, has regular Family Home Evenings, and is headed up by a benevolent patriarch and a gentle homemaker. But cheer up. Your character gets to live forever and (spoiler!) reproduce even in your postlife–another peculiarly LDS doctrine. Weird, yes . . . but definitely Mormon.

The Red, White & Blue Envelope, Please: Answers to Our July 4 Quiz
archives most recent
More from Beliefnet and our partners
previous posts