Did David Plot His Affair with Bathsheba? This Week in the Twible (2 Samuel 11-17) 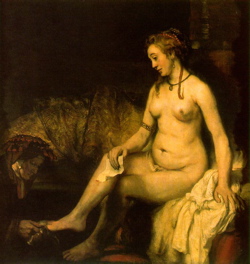 Well, here we go. David’s turning evil. Even here at Flunking Sainthood, where there’s quite a lot of grace for spiritual screwups, these actions sure aren’t ones we want to emulate. David’s downfall happens quickly: he stays home from battle one spring (what’s that old saying about idle hands?), and wanders out to the palace rooftop where he spies a lovely naked woman taking a dip. He wants her. He sends soldiers to fetch her. He takes her.

Except that I think it’s even worse than this. It’s pretty clear from the text that Bathsheba’s bath is a mikvah, a ritual cleansing after her monthly period (my beloved NRSV makes this interpretation explicit). And this raises the question of exactly how long David had been watching women bathe from the rooftop of the palace. Perhaps he’d been stalking Bathsheba for some time. His determination to get her does not seem like a spur-of-the-moment instance of lust, even if she did look as luscious as Rembrandt depicted her (at left).

In any case, the mikvah told him what he needed to know about Bathsheba, in case he didn’t already (and I’ll bet he did): she is married. Only married women are required to bathe in the mikvah before resuming sexual relations with their husbands. But David inquires about the woman’s identity anyway, and is told who she is and whose she is. She’s married to Uriah the Hittite, one of David’s top military commanders, who is off fighting the battle that the king avoided so he could stay home and fool around with Uriah’s wife.

So David’s been told in two different ways that Bathsheba’s married, but he forges ahead. Their wham-bam-thank-you-ma’am copulation doesn’t feature a single word of dialogue. In fact, the first time Bathsheba gets to speak in the text is when she announces that she’s pregnant. This dilemma sends David down a path to the Dark Side. He tries to get Uriah to go home and have sex with his wife (hence the “wash your feet” euphemism), but straight-shooting Uriah doesn’t think it’s fair to his fellow soldiers that he should enjoy any comforts while there’s a war raging. Since David can’t pass off the child as Uriah’s, he gives the order to have Uriah killed in the front lines of battle. David does everything but pull the trigger.

Is this that classic case where one unplanned sin leads to a hasty cover-up and still more sins? Or was the affair with Bathsheba premeditated? I think we all find the unplanned scenario easier to understand and to forgive, but there’s a strong hint in the text that David knew exactly what he was doing. I am liking David less and less.

Sat 7/17
#Twible 2 Sam 11: Dav knocks up bathing beauty Bathsheba, then kills off her virtuous hubby in army “accident.” There goes the monarchy.

Tune in to Flunking Sainthood each Friday for weekly Twible updates. Next week: Oh, Absalom, Absalom!

Walls and Immigration Reform: Rev. Ben Daniel in the Huffington Post
archives most recent
More from Beliefnet and our partners
previous posts