Three years ago this week, my wife and I were counting down the days of her bedrest until she hit 36 weeks. We had been told that this was the gold standard for twin pregnancies. Thirty-six weeks was considered term, would be the comfort spot for developmental milestones, and would even mean that our daughters’ lungs would have time to grow. I was busily planning all sorts of 36-week celebrations, but when I snuck out on the actual morning to pick up a peanut butter and chocolate cake we had recently tasted at a friend’s birthday, my wife got upset. (I was also picking up a secret gift I had ordered for the eventual birth-day itself, having insisted it be ready by 36 weeks.) But that night, she got over it, when I presented the cake and we threw ourselves a party. The girls would not come for another two weeks.
Once again we have twins on the brain at this time of year (and last night at 4:30 a twin in our bed, as they’ve learned to vault out of their cribs at night) as we plan a birthday party. But this year also brings some odd twin news.
First comes word that identical twins don’t have the same DNA after all. Scientists studied identical twins in which one shows signs of Parkinson’s or dementia and the other does not.

It has long been known that identical twins develop differences that result from environment. And in recent years, it has also been shown that some of their differences can spring from unique changes in what are known as epigenetic factors, the chemical markers that attach to genes and affect how they are expressed — in some cases by slowing or shutting the genes off, and in others by increasing their output.
These epigenetic changes — which accumulate over a lifetime and can arise from things like diet and tobacco smoke– have been implicated in the development of cancer and behavioral traits like fearfulness and confidence, among other things. Epigenetic markers vary widely from one person to another, but identical twins were still considered genetically identical because epigenetics influence only the expression of a gene and not the underlying sequence of the gene itself.
“When we started this study, people were expecting that only epigenetics would differ greatly between twins,” said Jan Dumanski, a professor of genetics at the University of Alabama at Birmingham and an author of the study. “But what we found are changes on the genetic level, the DNA sequence itself.”
The specific changes that Dr. Dumanski and his colleagues identified are known as copy number variations, in which a gene exists in multiple copies, or a set of coding letters in DNA is missing. Not known, however, is whether these changes in identical twins occur at the embryonic level, as the twins age or both.
“Copy number variations were discovered only a few years ago, but they are immensely important,” said Dr. Carl Bruder, another author of the study at the university. Certain copy variations have been shown in humans to confer protection against diseases like AIDS, while others are believed to contribute to autism, lupus and other conditions. By studying pairs of identical twins in which one sibling has a disease and the other does not, scientists should be able to identify more easily the genes involved in disease.

Perhaps less fascinating — but MUCH more alarming — is that Jennifer Lopez is putting her twins at risk. Hold your breath: Here come the nursery police. Here’s how one blogger characterized the nursery for her new twins: 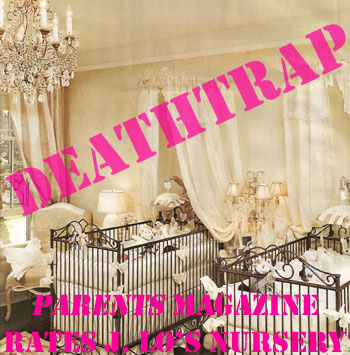 All this after Parents Mag piggybacked on the photos to set themselves up as the country’s Chief Nanny.

We all fight for first dibs on the office’s People subscription, and this week everyone was dying to see the “world exclusive” pics of your newborn twins. Max and Emme are darling, natch, and you look as glam as ever—but Parents staffers were kinda shocked at the photo of the babies’ ornate, Versailles-like nursery, which is filled with safety hazards. We want those sweet twins to stay out of harm’s way, so we’re begging you….please babyproof!
• Take the pillows, stuffed animals and blankets out of the cribs—they’re suffocation hazards.
• Get rid of the dramatic draped canopies hanging over the cribs, which can cause strangulation.
• Those cute bows tied onto the crib slats? Choking hazards as soon as the babies are big enough to get their hands on them.
• Throw a window guard on that open window!