I Left My Heart in Carolina

Episcopal Life online has this story up today. 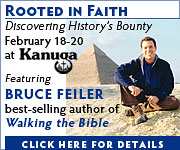 Best-selling author and commentator Bruce Feiler will bring his unique world view on today’s global conflicts to Kanuga Conferences February 18-20 for its annual Bowen Conference.
Drawing on extensive research and adventures in more than 60 countries on five continents, his talks will center on the theme “Rooted in Faith: Discovering History’s Bounty.”

Feiler is the author of seven books, including Walking the Bible, Abraham and Where God Was Born. He is an award-winning journalist and the creator and host of the PBS miniseries “Walking the Bible.” His most recent books combine history, religion, adventure and personal discovery and offer an interfaith message and a vision for peace and reconciliation.
During the two-day conference, Feiler will deliver three keynote addresses — one of which will provide a sneak preview of his upcoming book on religion’s central role in shaping America — with question-and-answer time after each address.
The Jewish-born author has spent 20 years as a commentator on American life and a decade reporting from the frontlines of Jerusalem, Cairo, Baghdad, Tehran and beyond. A graduate of Yale, Feiler holds a master’s degree in international relations from Cambridge. A regular contributor to NPR’s “All Things Considered,” he has written for The New York Times Magazine, The New Yorker and Washington Post, and is a contributing editor at Gourmet and Parade. A native of Savannah, Georgia, he lives in New York with his wife and twin daughters.
Affiliated with the Episcopal Church since 1928, Kanuga is a 1,400-acre camp and conference center in the Blue Ridge Mountains near Hendersonville, N.C. The Bowen Conference was created through the generosity of the late Buford Bowen as an annual conference to explore Christian commitment. Since the first was held in 1989, the Bowen Conference has grown into one of Kanuga’s premier conferences.

read next post
The Last Guidebook You Buy?
archives most recent
More from Beliefnet and our partners
previous posts