After camp I drove a couple of my students back home to Kansas. It was good to have the time with the three of them to engage and hear about camp from their perspective.

As a ministry we always try to include as much as we can from various cultural traditions, Kimchi at snack time, worship songs in Spanish, and so on. The goal is that everyone would adjust a little bit to to everyone else, So that we would all be a little bit uncomfortable and nobody has to be completely uncomfortable. Still, despite this, the camp was right in the middle of Missouri, and the great majority of people are white, so it took on a culture that was closer to white Midwestern than anything else.

The 3 girls I rode with were all black, and this made things more than a little bit uncomfortable for them as they adjusted to a culture that put them in a big room with what seemed like a sea of white people.

We talked about this for about an hour. Discussing what could have been done better, and what was done well enough to make them feel at home. Then we got distracted and started singing theme songs from TV shows. We made two stops on the trip, Once for lunch at a deep country BBQ shack, and once in Kansas City to take a break and switch cars. You’ll remember that earlier this year I lost my truck. so the first leg of the trip was in another staff worker’s car, and the next was in the Minivan I’ve been borrowing.

They missed Brandon, a Christian Rapper who left Staff recently to enter church ministry, so when we got into my Minivan I suggested we listen to the album he gave me (I was curious anyway.) By this time I’d been on the road for about 4 hours, the sun was getting low, the air was cool, and my leg was cramped, so I rolled down the window and rested my left leg on the mirror as I drove.

As we drove through Lawrence I stopped at a stoplight and saw that the car next to us had pulled out his camcorder. Apparently he had just never seen anything quite like a relaxed white man, driving through Kansas with 3 black girls while listening to christian Rap.

We turned up the music.

It turns out it’s not very hard at all to be so radical it turns heads. 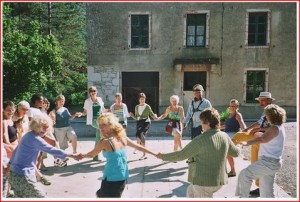