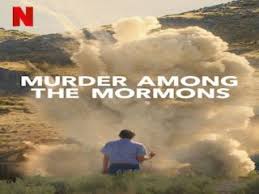 A comedy filmmaker gets deadly serious. Jared Lawrence Hess first exploded onto the movie-making scene with Napoleon Dynamite, the gently quirky 2004 teen comedy classic he directed and co-wrote with his wife Jerusha. Other comedies followed, including the 20o6’s Nacho Libre (starring Jack Black) and a short-lived Napoleon Dynamite animated series that aired on the Fox Broadcasting Network in 2012. But anyone expecting laughs out of Hess’ latest project will be surprised.

Murder Among the Mormons (dropping next Wednesday/March 3rd on Netflix) is anything but a comedy.  The three-part documentary miniseries Hess, a Mormon, co-directed with noted documentarian Tyler Measom, an ex-Mormon, tells the chilling true story of a murder/bombing mystery involving supposedly mystical documents that called into question the official Church of Latter Day Saints story of how Joseph Smith founded the Mormon movement. The case rocked the very foundation of Utah-based LDS Church in the 1980s.

My conversation with Hess follows the trailer below. Spoiler Alert: Certain twists and turns in the case, including the identity the killer (information available on the internet), are revealed in our conversation.

JWK: You’re background is in scripted comedy so how did you become involved in making a real-life documentary about such a serious subject?

Jared Lawrence Hess: I’ve been a big Mormon history buff for a long time. It’s just such a unique culture and religion. It has an endless amount of interesting stories.

I live in Salt Lake City right now and one of my good friends is this guy named Curt Bench. He’s in the film. He’s in the first episode. He ran the rare…section of this church-owned book store called Deseret Book in the eighties. He had bought a number of documents and books from Mark Hofmann during that time. Over the years when I had lunch with Curt, he just told these stories about the Hofmann case and it just completely blew my mind.

I’m also a big true crime buff and I’ve always wanted to do some things…in the documentary space. (This case) happened right in my community.  Mark Hofmann’s his home is just a few blocks away. Literally like a two-minute drive from my house (was) where he created his forgeries (and) where he assembled the bombs. So, it’s all right here kinda in my face. It’s just a true crime story unlike anything that’s out there – just as it relates to religion and belief and deception. So, yeah, there’s a lot to it.

JWK: So, who knew? The co-creator of Napoleon Dynamite likes documentaries.

JLH: I’ve always loved documentaries. I have a passion for documentary filmmaking. Kind of what I watch most, I guess, in my free time is nonfiction films or series. So, it’s something that I’ve wanted to do for a long time and Tyler’s a good friend who also lives in Salt Lake City and also has a direct connection to the story. His cousin – who happens to be Mark Hofmann’s college classmate – is in the film. He knew Mark quite well. So, Tyler…(is) an accomplished documentary filmmaker. We’ve known each other for years. When we found out that we both had a shared interest in and passion for this story we (just decided to do it).

JWK: The story almost plays out like a real-life version of The Da Vinci Code. Why were the documents involved so important to the LDS Church?

JLH: I think the origin stories of any faith are very important and sacred. For the LDS Church, their story of Joseph Smith trying to decide which church to join and having a theophany where he was visited by God the Father and the Son Jesus Christ and then later…by an angel who directed him to translate some gold plates. I mean that’s the foundation of the faith, right there.

JWK: You know what strikes me as weird. You’d think, if you were going to fake documents like this, you’d either create documents that backup the church version or somehow reveal Joseph Smith just to be a con man. But, instead, these documents create some kind of alternative mystical story.

JLH: Yeah…Joseph Smith, it’s documented, was like a treasure hunter in his early years. He did practice folk magic. That’s all confirmed – but in the eighties it wasn’t really known to the larger population of members of the church (that) had been raised in a more kind of faith-promoting history which was the version that Joseph Smith himself had taught which was, you know, “I was visited by an angel.”

So, Richard Turley, who is a church historian who’s interviewed in the film, says the familiar terms for Christianity like “God” and “angel” suddenly get twisted to like a more folk magic context (such as) a (magical) white salamander. So, suddenly (it’s like) a cult, right? And that’s where it kind of threatened (the LDS Church). They had to kind of reassess. It was like “Okay, this is threatening the founding story of us.”

JWK: From watching the documentary series, I can say it’s a very interesting case. Why is it so relatively unknown? It happened around the same time as the Unabomber and people certainly know that case. It’s not that long ago.

JLH: It was a very regional story but, at the time, it did make national news. It did go through the national news cycle – but then (after that) it wasn’t talked about. I think it was something that, for a lot of people (who had) been deceived, was embarrassing to talk about and so they just kind of wanted to move on from it as quickly as possible. You had a number of big institutions whose reputations were called into question because they had authenticated these things that ended up being forgeries.

JWK: Despite all the embarrassment, the fact that the documents were eventually proven to be forgeries must have been seen as good news for the church.

JLH: It was great news for the church but, at the same time,…(the LDS Church) had spent a lot of time – before it was known that they were forgeries – (trying to) provide a historical context to these documents. And then, when they found out that they were fake, I think that was embarrassing for a lot of people and they just didn’t want to talk about it.

I don’t know if you ever saw the documentary Wild Wild Country (about a controversial Indian guru) that was on Netflix. It’s really great. That took place in Oregon and it was (also) a regional story that also made big news but it kind of came and went.  It (now) lives in that place that, unless you were living in the community, you’d never know about it or hear about it.

JWK: So, you were raised Mormon. What’s your relationship with the LDS Church today?

JLH: I live in Utah and my family is all Mormon. I come from Mormon pioneer ancestry which is cool. I definitely have a lot of my own beliefs but I consider myself Mormon – but a very, very nuanced member, I guess you could say.

JWK: I’m sure the church was aware you were making this documentary. Did they try to influence you in any way?

JLH: No, they didn’t. In fact, they were very helpful. Richard Turley Jr. was extremely helpful. When we interviewed him he was the head of public affairs for the church. He retired in March of last year, actually. But he was extremely helpful. He’s written a book on it called Victims which I highly recommend for people that are interested in learning more. His book is very comprehensive about what occurred. Being a historian, he was very instrumental in helping (us).

JWK: What do you think the takeaway from this story is?

JWK: I guess with technology it becomes easier and easier to fake things.

JWK: What struck me about the docuseries is the dramatic quality of the story. It certainly could have been a scripted drama. Did you ever consider going that route?

Note: Murder Among the Mormon premieres next Wednesday (3/3) on Netflix. My review will be posted here on Monday.
___

Anthony Hopkins takes audiences on a journey inside the mind of a man stricken with dementia in The Father premiering in New York and Los Angeles today (2/26). A nationwide rollout is to be announced for the emotional drama co-starring Olivia Colman (The Crown), Mark Gatiss (Doctor Who), Rufus Sewell (The Man in the High Castle), Imogen Poots (Castle in the Ground) and Olivia Williams (Counterpart). The film is based on the play of the same name by Florian Zeller. Zeller, who directed the movie, shares screenwriting credit Christopher Hampton.  My review of the film follows the synopsis and trailer below.

SYNOPSIS: Anthony (Anthony Hopkins) is 80, mischievous, living defiantly alone and rejecting the professional caregivers that his daughter Anne (Olivia Colman) encouragingly introduces him to. Yet help is also becoming a necessity for Anne as she can’t make daily visits anymore and Anthony’s grip on reality is unravelling.

IMHO: The Father represents yet another brilliant acting achievement for Anthony Hopkins. Writer/director Florian Zeller is also to be credited for finding a fresh and insightful way to tell the story of a relationship disrupted by dementia. While we certainly feel the anguish of Anne (truthfully played by Colman, this movie is called The Father and not The Daughter for a reason as it presents is story from the point of view of the patient. That  means that, like the father, we are often thrown for a loop and confused by what’s going on. We aren’t asked to just sympathize with him but actually empathize with him – at least as much as a mere movie-going experience will allow.

Over the years there have been many movies made on the subject of dementia and Alzheimer’s disease – mostly all from the perspectives of perspectives of the caregivers. That is, of course, a very important perspective but Zeller’s POV paradigm shift in tackling the subject really adds something to the conversation. Highly Recommended.

Here’s the latest from the crossroads of faith, media & culture: 04/21/21 UP Faith & Family will be the first U.S. streamer to debut season 14 of the international hit family series Heartland when it drops on Thursday, May 6. New episodes will be added weekly. UP Faith & Family V.P. and Channel Manager Angela Cannon […]

A Guardian Angel runs for Mayor of NYC

Here’s the latest from the crossroads of faith, media & culture: 04/19/21 New York City mayoral candidate and Guardian Angels founder Curtis Sliwa talked with me about his quest to run as a Republican in a heavily Democratic city. Sliwa, who recently took a leave of absence from his job as a successful talk radio […]

Here’s the latest from the crossroads of faith, media & culture: 04/16/21 How did a young a young college dropout from Brunswick, GA go from earning money scrubbing toilets at a Publix to (seemingly) suddenly becoming a breakout hip hop artist? For twenty-two year old Christopher Hulvey (aka Hulvey), the answer comes town to a […]

Here’s the latest from the crossroads of faith, media & culture: 04/14/21 72nd annual Christopher Award winners announced. COVID-19 has again scuttled the in-person event but the virus hasn’t stopped the Catholic organization from proceeding with, as it has done since instituting the awards in 1949, celebrating media artists whose work “affirms the highest values […]