Healing the wounds of religion 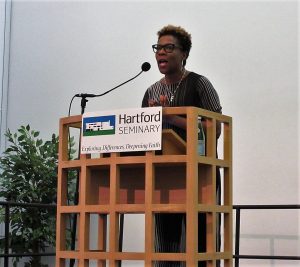 Respect for thoughtfulness grew as I listened to Dr. Terrlyn Curry Avery* speak at Hartford Seminary last month. Wounded by Religion, was her subject of conversation, and converse she did as she questions and remarks were fielded from our audience.

Religion is part of human life, whether we want to admit it or not. And I’m saying, it’s human life, more than religion that wounds. The belief in a mortal life, with good and bad always at war, wounds the spirit.

So, it’s spirit that needs nourishing, and this in turn can nourish religion. In other words, it does little good to condemn religion.

Dr. Avery exemplified the loving approach to healing. She is a psychologist and ordained minister, who seems to me, acts on logic and inspiration rather than reactive human passions.

From 21st Century Science and Health:

“It is physical emotionalism, and not Soul, that triggers a nervous passion for God. Allow spiritual sense to guide your higher experiences, because fanaticism and self-satisfied devotion do not promote spirituality. God is not influenced by human beings. The divine ear is not an auditory nerve. The Divine is all-hearing and all-knowing Mind, recognizing and supplying our every need.

Prayer can be dangerous if it tempts us to voice desires that aren’t real or to assume we are more spiritual than we really are. We become involuntary hypocrites when we use prayer to console ourselves without making genuine efforts to break out of illusory mindsets. Prayer is hazardous when we stay in deceptive mindsets and think we can pray for forgiveness later. Hypocrisy is fatal to religion.

Wordy prayers and long prayer sessions may give us a quiet sense of self-justification, but they only feed hypocrisy. We don’t need to despair of an honest heart, but there is little hope for the phony prayers of people who randomly face their faults only to try to hide those character flaws. The deceit holds secret fellowship with sin but can’t ultimately be hidden as Jesus noted, they are, “like whitewashed tombs, which look beautiful on the outside but on the inside are full of dead men’s bones and everything unclean.”[1]

If someone appears to be passionate and prayerful, but is also impure and insincere, what can we say? There is nothing to say if that person actually puts into practice his or her prayer. If we feel the aspiration, humility, gratitude, and love which our words express, God accepts this.”

Rad headgear and the sisterhood: Not what we wear on the head but how we wear it

Most of the 8.5 million registered motorcycles in the United States belong to men. If women are involved, they usually sit behind the men drivers and go along for the ride. To be honest, I support these women riders/sitters. Although I operate my own bike, I’d never tell another woman to do the same. If, […]

It took three times in a row for me to hear, “It’s okay, Cheryl, I’m in control,” for it to stick. A freak explosion of fire in the heavy equipment I was operating, distracted me. Clothes on fire, I escaped from an open window in the cab. I have no recollection of jumping and crashing […]

Vowing not to be those parents who hang onto the family farm with the hope that the children return to continue the tradition, my husband and I put our farm up for sale after our girls were out of college and told us they had no interest in farming. The property sold in five days. […]

More than 30,000 Christian denominations exist worldwide, according to the World Christian Encyclopedia. Thirty thousand. That’s an enormous number. A 2018 Barna Research study reports that, “Churches of all stripes practice their own flavor of ministry in cities across the United States, all based on particular interpretations of scripture and style.” Arguably, there is no […]