Manners or Me First? A Tale of Ethics and the Native New Yorker 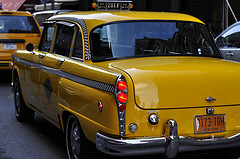 By way of introduction, I’d like to share a little about myself. (I’d promise not to do it again, but I undoubtedly will.) I was raised by a family who assumed I’d always instinctively understand the difference between right and wrong. Though I’m of Jewish descent, we didn’t subscribe to a particular belief system, so as a child, in place of religious rules and regulations, I was instead shamed with a frown of disapproval or dished up a helping of residual Jewish guilt when I did something inappropriate. Good behavior was modeled for me in the little things, like showing up on time and following through on promises we made. There were few actual conversations in our house about how to behave or what to do in case of an ethical dilemma. In fact, growing up in the hustle and bustle of Manhattan, mom’s best advice was usually about how to make sure no one took advantage of us. For instance, I vividly remember an incident that happened when I was only perhaps five or six and my brother three years older:

We’re late for something, and we’re standing on the corner of Third Avenue, trying to catch a cab. Mom, me and my brother are staking out different street corners and flailing our hands to flag down a taxi. It’s close to rush hour, it’s raining, and we’re having absolutely no luck. If we don’t make it to our destination soon, it’ll be too late. Waves of anxiety are coming off us, until–at last!–we see the bright yellow beacon of a checker cab. (Yes, they still had those when I was little.) It swings through traffic and screeches to a halt in front of my brother, who steps up and hauls open the door. All of a sudden, a woman in a mink coat carrying a dozen shopping bags darts in front of him and hurls herself into the taxi. “Oh,” my brother stutters. “I’m sorry, was this your cab?” He politely closes the door for her and backs away. The taxi zooms off, leaving him crestfallen in a puff of exhaust. My mother, who has been on the opposite corner of the street trying to cover all our cab-catching bases, trots over with me in tow. “What happened?” she wants to know. “That lady took our cab,” my brother replies despondently. “Jason,” my mom patiently explains, “you don’t help someone like that with her door. The only proper response in that situation is, “*&#@ you, lady!”

Years later, I’m still trying to figure out this whole ‘right and wrong’ thing. Is it relative? Absolute? How can I strive for honorable behavior on a daily basis, and what if I fall short? Lately, I’ve been thinking about this more often; my husband and I have been considering having children, and I’m pondering which values I most want to instill. Self preservation, or societal cooperation? Manners or me first?

read next post
How far would you go to get rich quick?
archives most recent
More from Beliefnet and our partners
previous posts