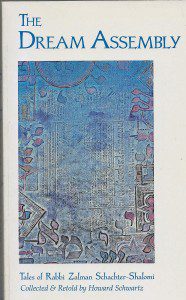 Rabbi Zalman Schachter-Shalomi related a wonderful teaching story about interactive dreaming in The Dream Assembly.  A bunch of Hasidic rabbis are discussing the goals of prayer. Instead of joining the debate, Zalman says, “I would like all of you to join me in a dream tonight.” Then he immerses himself in prayer.

The others are confused. How can you join another person in a dream? Then someone remembers tales of rabbis who met each other in a “dream assembly” in former times. They used standard formulas in the prayer upon retiring to synchronize takeoff.

Someone remembers the old mystical teaching that “those joined in prayer together will be joined together in a dream.”

That night (as the story relates mysteriously) the Hasidim lay down and closed their eyes “just as the Shekhinah turned to face herself in the mirror, and that night they met each other in a dream.”

The dream locale is an Otherworldly orchard full of beautiful but unfamiliar fruit, filled with unusual light, as if from an unseen sun. Only one remembers that Rabbi Zalman told them to meet him in a dream, and he does not tell the others for fear they’ll wake up. Instead, he simply reminds them they agreed to meet Zalman.

They find him under a tree. He’s younger and brighter. He refers to the difficulty of bringing them together — harder than finding 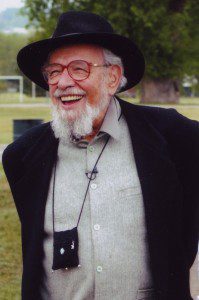 and ascending a ladder to heaven. He speaks of how each generation requires a set of wings to carry its prayers to Sandalphon, who will weave them into garlands for the Holy One on his throne; each generation must create its own mystical dove. In the dream, he assigns his companions the role each will play in creating this mystical bird. They wake with the beautiful echo of birdsong in their minds; it returns every time they pray.

Text adapted from Dreamgates: Exploring the Worlds of Soul, Imagination and Life Beyond Death by Robert Moss. Published by New World Library.

Rabbi Zalman Schachter-Shalomi,  considered the spiritual father of the Jewish Renewal movement —  who brought back ancient Judaic traditions of mysticism and meditation, gender equality and ecstatic prayer — passed on July 3, aged 89. May he fly with the great dove.