Call on the Library Angel, and check your sneakers 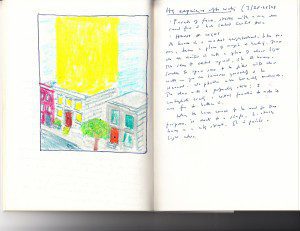 The Library Angel. That was Arthur Koestler’s name for the shelf elf that arranges that a certain book appears (or disappears) in unusual ways at just the right moment.

To get the attention of the Library Angel, pick any book, open it at random and see whether there is a clue for you on the page you are now looking at..

You may find you have a favorite book for this game, or a succession of them.

“Bibliomancy” is the fancy name for divination with books. When you get your message from the first line or two on the page, the more exact term is “stichomancy”, which means divination with lines or stanzas.

My favorite books for games of this kind are my own dream journals. Opening one at random is the only practical way for me to keep in touch with my “old” dreams now that they fill many thousands of pages.

Here’s an example of how the Library Angel came to play with me when I opened an old dream journal:

Catching up with the Black Sneakers

It seemed my waking life had caught up with something I had dreamed eleven years earlier. But wait. If one detail from an “old” dream had manifested, wasn’t it possible that there were other clues in the 1993 dream to what was going on now, or might happen in the near future? I pored over the details of the 1993 dream report.  I noticed this:

I found some loose index cards, covered with my own handwriting. I know these contain treasure.

I wandered my house with these words in my mind. In a guest room we were using mainly for storage, I found that loose index cards had spilled out of a cardboard box. I would normally have stuffed them back in the box.

Because of the “old” dream, I carried the cards into my office. I had written on them even earlier than 1993, back in 1987-8, a time of visionary encounters with wisdom keepers of Iroquois tradition. My handwriting was easier to read then than it was later. I found the “treasure” promised eleven years before. The information on the cards gave me the inspiration for two vital chapters in Dreamways of the Iroquois that I had not planned to write until the spirit of synchronicity helped me to pick the right page in an old journal.