The best divination deck ever 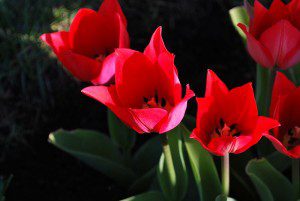 Today the tulips are blazing red and gold, pink and purple, in my local park, and soon it will be Tulipfest. My mind goes back to a coincidence card game we played in one of my recent evening classes.

A man seeking guidance on a relationship drew a card that read, “Tulips are bursting into flame.” I told him that if this were my card, it promised an explosion of passion, edged with danger, with the possibility that things would come to a head around Tulipfest. I wonder how that is going to work out for him.

Many of us use cards for divination, as well as entertainment. We cast Tarot, we pull a card for the day from an angel deck, or a set of animal cards, or a Celtic oracle deck, or a good old-time pack of playing cards. The Coincidence Cards are the best divination deck, ever. They are created in a few minutes, in a unique window of time. They exist as a deck only during this short period of time, and are never played again. Their content is ever-fresh, ever-renewing, streaming straight from the studio of dreams and the factory of synchronicity.

I have a low boredom threshold, and I invented the Coincidence Card Game, with guidance from a dream, when I wanted a new game for one of my workshops a decade ago. For full instructions on playing the game, you’ll want to go to my book The Three “Only” Things.  But I’ll give a summary here.

First, you need tools: a deck of ordinary 3″x5″ index cards, preferably blank on both sides, and a bunch of cheap pens. Next, you need a group of at least four people (more is better).

You give everyone a card and ask all the players to write something on one side. What are they going to write? I encourage people to write a summary of a dream, but really almost anything will do: an incident from waking life, a reflection, a favorite quote. Players are instructed to write legibly.

When everyone has filled in their cards, the leader gathers them and shuffles them. Now we have a deck.

To make this an oracle, you now have everyone set a clear intention for guidance. What is your question for the oracle? What is the theme on which you would like some help or counsel? This may range from “What is my life to purpose?” to “Should I call up the cute guy I met at the gym?”

When everyone has set their intention, the leader goes around the circle, offering the cards. Each player draws one at random – and is not supposed to peek at the message on it until everyone has a card and it’s time to hear from the oracle.

The game requires us to pretend that whatever is written on the card is a direct message from the universe in response to the intention for guidance. The message may be obscure or ambiguous but, hey, that’s how oracles stay in business long-term.
We sometimes draw our own card – the one we filled in – which is statistically improbable and often very interesting. It suggests, for one thing, that you already have the answer. You don’t need to look outside yourself, only to go deeper within
As a divination deck, our Coincidence Cards can’t be beat. We come up with a one-time deck, exclusively for us, that will never be used in this form again. Of course, some of the messages are “keepers”. My journals are stuffed with index cards whose inscriptions remind me of big dreams and coincidence fugues, of wildly funny incidents and of moments of insight and epiphany when we punched a hole in the surface world and saw into a deeper order of reality.
I am still thinking of those tulips that burst into flames. There was a second line in the message for the man who wanted guidance on relationship: “An elephant steps through the fire and smoke, and I know all will be well.” We agreed that this brought a blessing, because elephant-headed Ganesha is one of the most beloved forms of the Gatekeeper, that divine energy that opens and closes roads and doors in life. And is most often revealed in the play of coincidence.

The White Queen Gambit: when the body reacts to an event before it happens
archives most recent
More from Beliefnet and our partners
previous posts