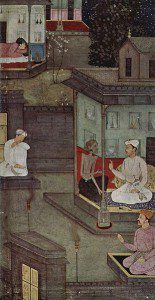 In Hindu tradition, dreaming is the key to other worlds, and the literature and sacred writings of India are a treasury of tales of dream travel, clearly grounded on experience. The Yogavasistha, a vast Kashmiri compilation from the first millennium CE, is one of the richest troves.

The travelers find that time is elastic. You may live a hundred years in a dreamworld and return to find that only a day has passed in ordinary time.

What is experienced in the dreamworlds is real, and has real consequences in the traveler’s ordinary. Spiritual apprenticeship and initiation can take place in this way. Lavana applied his mind to offering the elaborate sacrifices required at a royal coronation inside a dream. He supervised three Brahmins actively performing the required sacrifices while a fourth acted as witness to the correctness of the proceedings. In this way, Lavana accomplished work of “royal consecration” that normally involves twelve years of effort, suffering and sacrifice. However, the gods made him suffer in another way – and learn, in the process, about the human condition and the connection between the life experiences of different personalities in different circumstances.

Lavana was seated in splendor on his throne, drinking a warm cup of mulled wine, when a wandering sage appeared, leading a magnificent horse. When the king turned his attention to the horse, he found himself mounting it and galloping off across plains and desert. He was unable to check the horse until his foot caught in a dangling vine and he was pulled out of his stirrups. Broken in body, he was dying of hunger and thirst when a dark woman – an Untouchable, lowest of the low in India’s caste system – found him. When he begged her for food and water, she agreed to save him on condition that he accompanied her to her village and married her. The king agreed.

He spent a lifetime among the Untouchables, raising children, working in the cemeteries among the bodies and ghosts of the dead. When he died, his corpse was thrown on the funeral pyre. In that instant, the king was jerked out of his dream as his headed nodded forward onto his chest. The mulled wine in his cup was still warm.

There are more complex versions of this story. In one of them, a Brahmin ascetic dreams he is an Untouchable who dreams that he is a king. The ascetic is standing in a river meditating, with the water up to his chest. His awareness is drawn into the life of an Untouchable who enters a city where he is hailed as the new king. After several years, old companions recognize him and he is dethroned as an unclean impostor. At the end of his life, his body is thrown on the funeral pyre. As it burns, he finds himself back in the Brahmin’s body he left standing in the river.