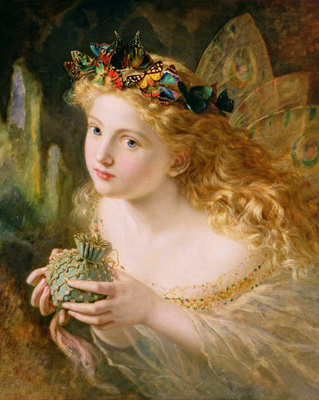 She was there, before I thought of her, a beautiful little girl with flame-red hair. She looked very like her adult self, except that in the adult the flame had dulled, and a great loose rampart of flesh had been thrown out as a buffer between the woman and the world that had hurt the child.

You’re Jenny, aren’t you? I spoke to the child in my mind.

– I’m Jen, she corrected me. Like the girl in The Dark Crystal.

I’m glad to meet you, Jen. When did you arrive?

– I came just now because I wanted to know why people were laughing. And I like the pictures.

There were lots of drawings on the floor of the workshop space. We had been doing adult kindergarten, using crayons and markers to make quick sketches of images from our dreams.

– I like art a lot. But Mom said it’s a waste of time, and he ripped up my best pictures.

I guessed that “he” was her father or brother. As for Jen, she appeared to be about five years old.

Things are different now, I told her. You can do all the art you want. Don’t you want to come join us?

– She’s fat, Jen indicated her adult self. And her hair is so…scraggly. I don’t want to be with her.

You belong together, Jen. It’s going to be fine, really. Together, you’ll be happy and bright and alive. You can draw and paint and dance and do whatever’s fun.

I felt the child’s sudden fear, and pain.

– You have to promise they won’t punish me for breaking the dishes.

I didn’t know what this meant, but I felt it was safe to make the promise.

I promise you’ll be safe, Jen. Nobody will hurt you again.

I let her see the face of the Tiger who is often with me, especially when lost children need to be reassured that it’s safe to come back into the world, in the body of their adult selves who have suffered pain or loneliness or worse. My Tiger looks terrible fierce to adults, but very young children love him and trust him better than adults. Jen threw her arms around his neck and he tickled her with his whiskers.

I wanted to give Jen a safe place to wait, before I helped to reintroduce her to the adult Jenny. I offered her a chamber filled with golden light, a citrine in my bag of tricks.

– There are others, she told me. I can help.

She was a wise child, this little one who had come back, so close to her adult self, drawn by laughter and creation. She showed me where a teen self of Jenny had been shamed and betrayed, leaving the hole in her that she tried to stuff with food and sugar. She showed me a mature woman artist and graphic designer that Jenny might have become had she been willing to take a creative risk.

At the end of the journey with the drum, I invited the adult Jenny to welcome home, into her body and her life, these aspects of her vital soul energy and identity that had been missing from her for decades. She waa more than ready.

I had an essential question: what was this business of being scared of being beaten for breaking the dishes?

At first, adult Jenny could not explain what her child self had told me. Then memory, along with soul, came flooding back. A terrible night when her father was drunk and more than a child’s drawing on the refrigerator had been ruined.

Jenny could recall this, then put it aside. Soul recovery is about so much more than retrieving repressed memories. The light of little Jen, and that beautiful teenager, and that artist, were shining in Jenny’s eyes.

“Licorice sticks,” Jenny said. “I used to love licorice. Haven’t had it for years and years. I would really like some licorice sticks.”

I gave her a dollar, pocket money to buy licorice sticks for little Jen. When we make deals with younger selves, we are required to honor them.

This is a brief account of an episode in which I was privileged to facilitate soul recovery healing in the midst of one of my Active Dreaming workshops. I was drumming for the group, to power a journey into shamanic lucid dreaming, when little Jen appeared to my inner sight and we engaged in a conversation that led to the healing. I love the way she was drawn by laughter and play and adult kindergarten.

As in this case, if we are going to assist in the homecoming of a younger self – for ourselves or others – we are often required to play the role of negotiator or deal-maker. A younger self who checked out of a life because of pain or trauma, or tedium or despair, must know that if she agrees to join her energy with that of the adult, she will be safe and she will be able to do the things she loves to do, whether that is making art, or drinking the rain, or chomping licorice sticks.

Sophie Gengembre Anderson (1823-1903) Take the Fair Face of Woman, and Gently Suspending, With Butterflies, Flowers, and Jewels Attending, Thus Your Fairy is Made of Most Beautiful Things