How Does An Anxiety Attack Feel? 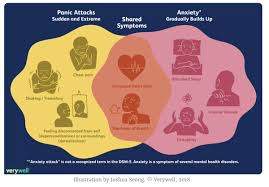 What is the difference between a panic attack and a anxiety attack?

First of all, an anxiety attack is different from a panic attack. A panic attack is sudden and goes away in a few minutes. You can calm down a panic attack using cognitive behavioural techniques like controlled breathing exercises.

An anxiety attack builds up over time and then gets released. The release is either mild or severe. The anxiety attack lasts a long time. The longer the attack, the stronger the symptoms become.

However, an anxiety attack also has an overwhelming sense of panic. You feel like you’re losing control or going crazy. You feel like the world has piled everything up against you, or your world is crashing down on you.

Other symptoms of an anxiety attack include nausea and dizziness. You can feel very hot or very cold. Then there’s also the feeling of floating outside your body, or feeling like someone else is controlling your body. Either way, you’re convinced you are going to die.

Anxiety is a mental health issue.

Anxiety is caused by stress. There are many ways to manage anxiety. Mindfulness and cognitive therapy work best for controlling anxiety.

When it comes to anxiety attacks, you can be proactive if you know you suffer these attacks. Physical exercise is one of the better methods that can prevent or reduce the impact of an anxiety attack. Exercise eases and reduces tension of your muscles. It also tires you out, helping to give your mind a break from negative thoughts.

Another way to be proactive is to practice deep breathing if you notice you’re feeling overwhelmed. Deep breathing is when you concentrate on how your lungs fill with air, and then release it. Deep breathing exercises help you get control of your body, and as you get more control you loose that feeling of being powerless.

Anything that gets stress out of the body is good for you. Mindfulness and meditation are two good ways to control thoughts that are negative self talk. Thinking positively isn’t always easy. You may need to have things written down to remind you about the good in your life.

Learn to feel good about saying, “No.” You don’t have to do everything and you don’t need to do it alone. Have a buddy or two you can go to and talk about what’s stressing you out. And have someone ready to be there for you when you’re having an attack.