Heightened Risk Between Mental Illness and Substance Use 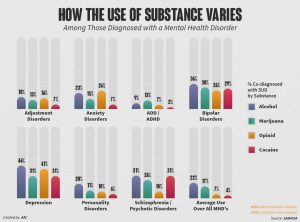 Substance use disorder can affect anyone. A recent study by American Addiction Centres found that people suffering with mental illness face a higher risk of developing substance use than the rest of the population. The substances looked at were alcohol, marijuana, opioids, and cocaine. Depending on the type of mental illness, a person can be five to eighteen times more likely to develop a substance use disorder. Alcohol is the most commonly used substance. However, in the case of anxiety disorders, opioids are the most commonly used.

Every mental illness has symptoms that are challenging to those affected by them. Adding stigma into the mix creates a situation where dealing with mental illness goes to a whole new level of difficult. Stigma prevents people with mental health issues from speaking out and getting help. Instead, these people self-medicate with whatever is available.

Personality disorder is a type of mental health issue in which a person has a rigid and unhealthy pattern of thinking and behaviour. This type of person has trouble relating to other people. Specifically, the person has unstable relationships, impulsive and self-destructive behaviours, extreme emotional swings, and fear of abandonment. These anxieties and behaviours can easily cause a person to abuse alcohol and drugs.

The next biggest group of substance users are bipolar disorder and schizophrenia patients. These are both eleven times more likely to use substances than the average person.

Alcohol is the most frequently used substance across all mental health disorders. This includes depression and bipolar disorders. But there are two exceptions.

It’s worth noting that within every mental illness studied, there was some amount used of each substance in the study (alcohol, marijuana, opioid and cocaine). Although cocaine is less popular in almost all illnesses (with the exception of schizophrenia), every disorder has some cocaine use.

How does this affect people?

When a person suffers from both mental illness and substance use, the person is more likely to end up homeless, incarcerated, or institutionalized. For example, someone affected by ADD or ADHD is twelve times more likely to spend time in the justice system if there is also substance use disorder.

This means that for better or worse, those diagnosed with a mental illness will more often receive formal intervention through either the judicial or psychiatric system. While these interventions can be beneficial, they can also be financially costly and detrimental to the individual’s reputation.

Recently, substance use has decreased in the US

The only age group that did not decrease substance use was children under age 17. However, that substance use consistently affects only 1% of this population.

There is still a need for action to be taken against substance use.

Limiting substance use of people with mental illness with not only improve the overall lives of these individuals, it could also potentially reduce homelessness, incarceration and institutionalization.

It’s also important to educate people about substance abuse disorder. This is a topic that society should be comfortable talking about. People must feel free to discuss how to combat substance abuse without fearing stigma.

Mental illness seems to be part of a domino effect in which every factor or action leads to something else – such as substance abuse.

Whether or not you are affected by a mental illness, chances are you will eventually encounter someone who is. This highlights the importance of being knowledgeable and aware about mental health.

For more information about this study, contact American Addiction Centres. 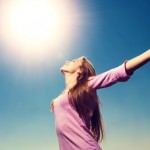