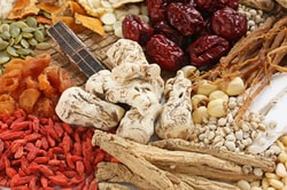 Chinese herbs for depression have been used for thousands of years. Chinese herbs to treat depression and anxiety come in various forms – as dried plant parts, pills or capsules, or as powders. Only a small portion of what is used in Chinese traditional medicine is actually known or used by Western medicine.

Traditional Chinese medicine deals with the flow of energy in the human body. Health is how this energy flows or doesn’t flow.

Qi is the flow of your body’s energies. Qi is divided into Yin and Yang, sort of positive and negative, female and male energies that combine to form the whole Qi. Qi can’t be seen, because it is energy. But Qi can be tracked.

Qi flows through your body with your blood and through discreet pathways known as Acupuncture Meridians. If you are considered ill if any of these passages are blocked or hold stagnant Qi.

Depression is The Troubled Spirit

Chinese medicine believes that strong emotions affect organs. Too much joy or lack of joy will stress the heart. Worry eats at the gut. Grief hurts the lungs. Fear taxes the kidneys. Anger assaults the liver.

In depression, it is not so much that depression is a mental health issue or a disease. Instead, depression is the troubled spirit. The Qi is stuck in the person’s chest, held captive or oppressed because of anxiety.

If you think of what happens when you’re anxious, you realize your chest tightens. That is your qi being held captive. If your stress continues, or you’re not able to express yourself, then your qi gets stuck. Like how cellular memory forms. In time, the stuck chest qi can affect other organs. Most notably a stressed chest qi can cause further anxiety and heat up your heart, or create anger which inflames your liver.

Herbs that help release your qi when depressed

Hare’s ear root (bupleurum chai hu), is the best known herb for getting your chest qi moving. It is a bitter root. The ability of hare’s ear root to do its job is greatly enhanced by combining it with a small amount of ordinary mint (bo he).

For disturbed qi that causes anxiety or PMS a person can use:

To treat depression with irritability use:

Arctic root is used to boost overall physical activity and mental vitality. Arctic root increases your feel good hormones in the brain, making you more resilient to physical and emotional stress. Some claim it works faster and better than antidepressants.

Ginkgo bilboa is used to improve memory, but it works even better treating depression. Ginkgo increases the flow of dopamine and serotonin to the brain, as well as increasing overall blood flow to the brain.

Chinese herbal medicine is usually done in partnership with other forms of healing. These include acupuncture, massage, exercise, and dietary therapy. As I always recommend, see a mental health professional before you try any new treatments for depression.