Some intriguing news from across the pond, courtesy the BBC:

A distant relative of Princes William and Harry has moved a step closer to becoming a saint. 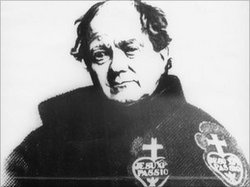 A Vatican investigation has declared that Father Ignatius Spencer, who is buried in Merseyside, lived a life of “heroic virtue”.

The priest, who is buried in the church of St Anne and Blessed Dominic, in St Helens, was a great, great, great uncle of Diana, Princess of Wales.

Rome has to verify two claimed medical cures to declare someone a saint.

Father Ben Lodge CP, who is responsible for promoting Father Spencer’s cause, said the Vatican’s move was “good news”.

Born George Spencer in 1799, he was the youngest child of the second Earl Spencer, who was First Lord of the Admiralty at the time.

He grew up at Althorp, where Diana Princess of Wales is now buried, and was an Anglican clergyman in the area before his conversion to the Roman Catholic Church scandalised some sections of Victorian society.

The Spencers, who were ancestors of Winston Churchill, were the fifth wealthiest family in the country.

On becoming a Roman Catholic priest, Father Spencer was attracted to the Passionist congregation – a religious congregation which lived a life of radical poverty.

He became noted as a preacher who was equally at home among the aristocracy as he was among the urban poor.

He was a forerunner of the drive for better relations between the Roman Catholic Church and other Christian denominations with his desire for “unity in truth”.