The remarkable story of Dr. Rich Meehan and his work among the poor in Los Angles deserves to be heard by a wider audience — especially now that he is hanging up his latex gloves and devoting his time to caring for his wife, who is ill with Alzheimer’s. An invaluable outreach to the outcast is about to disappear. 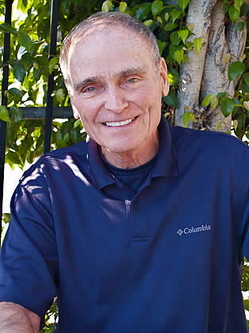 The dentist from the South Bay has been driving down to the Los Angeles Catholic Worker’s dental clinic at Sixth and Gladys once a week for 18 straight years. He started while he still had a thriving practice in Torrance and just continued after he retired 12 years ago. It’s a bare-bones operation tucked back of “The Hippie Kitchen” soup kitchen and St. Francis Peace Garden with picnic tables among tall palms and leafy shade trees. The clinic is on the bottom floor of a nondescript cinder-block two-story with a multi-color mosaic of four big daisies on the front.

Meehan usually sees at least eight patients from 9 a.m. until about two o’clock in the afternoon every Friday. “We either do extractions, cleanings or fillings — and that’s it,” he reports. “We don’t do anything real heroic. If it’s a difficult extraction, like an impacted wisdom tooth, I refer them to County-USC Medical Center. They have some really good oral surgeon residents there. For dentures, they go to the Union Rescue Mission.”

Most of his patients are locals. They’re either homeless or live in nearby SRO (Single Room Occupancy) cheap hotels. But some come from far away, like Tabia Salimu, who took two buses and the Red Line train, a three-hour trip, to get here from a family shelter in North Hollywood, where she’s been living for almost two years. The need for dental care is so great on skid row that his patients are picked days before by a lottery.

“With extractions, I proceed slowly so that we can get it nice and loose,” the former USC dental school faculty member points out. “I mean, I try not to be aggressive. I want to be as gentle as I can, but yet you still have to get the tooth out. But she was a great patient, very cooperative. And most of them are.”

“It’s been a good run — 18 years,” Rich Meehan says, sitting outside at the nearby Catch 22 Seafood Restaurant after one of his final busy Fridays at the dental clinic. “I love coming down here. I like being associated with the poor. I mean, not to be overly spiritual, but if you read the Bible the Lord talked about the poor all the time. And I’m not really poor, but I want to help the poor. I feel close to them and identify with them. And it’s very fulfilling working with them and helping them in the way that I can.”

The retired dentist, who had his own practice for three decades, feels at peace with his decision. He and Pat have been married 48 years, raising four daughters and two sons to be caring, altruistic adults who live out their Catholic faith. But Pat’s Alzheimer’s Disease is progressing now, making her less stable on her feet. Recently she fell. And even though his wife has caregivers during the day and evening, it got him thinking, “What if she falls again and I’m 30 miles away?”

The St. John Fisher parishioner knows he’ll miss practicing every week on skid row. Early on he fell in love with the Catholic Workers. “They espouse everything that I believe in as far as their social justice basis of Dorothy Day’s movement,” he says. “One of the things I really stress with my children is borrowed from [Catholic Worker cofounder] Peter Maurin’s often quoted phrase: ‘We must live more simply, so other people can simply live.’

“And we need to help those who are less fortunate than we are,” he adds. “Every once in awhile I’ll say to the kids, ‘Have you gone through your closets lately? Because those clothes that you aren’t wearing don’t belong to you. They belong to the poor.’ I just think serving the poor is a calling.”

Read it all. We need more people like him.