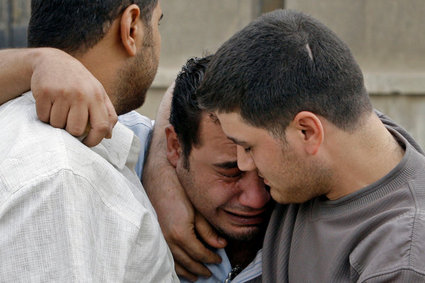 Exactly two weeks ago, late on a Sunday afternoon, a young woman named Raghada al-Wafi ran to her local church, with some wonderful news to share with the priest who had married her: she was going to have a baby. She asked the priest for a blessing.

He was happy to give it.

It ended up being one of the last acts of his life.

Moments later, the priest, Raghada and her unborn child were slaughtered. They were among the Catholic faithful killed by terrorists at a Baghdad cathedral – Our Lady of Salvation — on October 31st.

It was a horrific attack. Gunmen stormed into the church and accused the Christians of being infidels. Then they began randomly firing on them. Dozens of worshippers sought sanctuary in the church sacristy. But many more weren’t as lucky. The siege lasted four hours. When it was over, more than 50 Iraqi Catholics had been killed, including two priests.

It was one of the deadliest attacks on Christians since the Iraq war began.

It wasn’t the first. It won’t be the last.

“They will seize you and persecute you,” Jesus told his followers in today’s gospel. “They will put some of you to death. You will be hated by all because of my name.”

In today’s gospel, no less than TWO times, Jesus predicted suffering “because of my name.”

Because of being a believer.

Because of being a Christian.

It was true for the innocent men, women and children of Baghdad who lost their lives in an explosion of gunfire two weeks ago. It happened simply because they were Christian.

The tragedy at that Baghdad church is another chilling reminder of the terrible price so many are paying for bearing the name “Christian.” Here at Our Lady Queen of Martyrs we cannot help but grieve for these modern martyrs, butchered in a house of God, a church named for Our Lady – named ironically, poignantly, Our Lady of Salvation.

In these last weeks before Advent, again and again the scriptures point to the end of days, and a final judgment, and a time of suffering and hardship. We are being challenged to take stock, to be prepared.

But we are also being challenged not to give up. To persevere.

“By your perseverance,” Jesus said, “you will secure your lives.

Remember the message from last week, from St. Paul:

“May the Lord direct your hearts to the love of God and to the endurance of Christ.”

Or recall the story from two weeks ago, the day of the brutality in Baghdad. On that Sunday, we heard the story of Zacchaeus – a small man who climbed a tree to catch a glimpse of Jesus. Christ saw him and called out to him, and gave him the gift of salvation. Zacchaeus was rewarded not just for his faith, but for his tenacity, and his perseverance.

Perseverance isn’t easy. It was never meant to be.

These days, some will tell you that God wants you to be happy and comfortable and rich. That “prosperity gospel” can be deceptive. The fact is, God wants all of us, first and foremost, to be saved. And salvation comes at a cost.

We shouldn’t deceive ourselves. The life of the Christian is a life of sacrifice. It is a life of love that bears any burden.

And it because of this: we are the body of Christ.

We are the body of Christ, shattered by bullets in a cathedral in Iraq.

All this we suffer, in ways large and small, because of his name.

Because we are Christians.  We are the Body of Christ.

Last Sunday, one week after the attack at Our Lady of Salvation, the people who worship there went back. But it wasn’t like before. And it wasn’t like just walking into this church today. They had to walk past police barricades and military trucks. They had to pass a security checkpoint and be frisked for weapons. But, incredibly, they went back. They had to. They walked into a sanctuary pock-marked by bullet holes, with bloodstains on the ceiling, bloody palm prints on the walls. They removed the pews. And they set out candles in the shape of a giant cross. 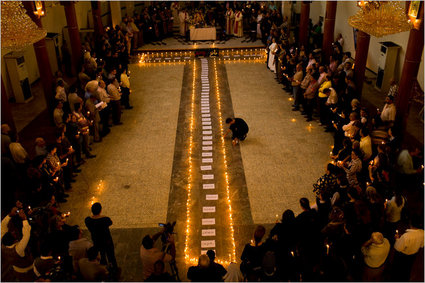 One of the parishioners put it so simply, and so beautifully. He said that he returned because the week before he hadn’t finished his prayers. I need to finish them, he said.
A woman with a bandage around her knee told a reporter “We forgive them. We’re not afraid. They gave us blood and we give them forgiveness.”

And then there is 28-year-old Helen Amir, a young mother, who did not belong to Our Lady of Salvation, but began going there last week to show solidarity.

We are the Body of Christ, We get up when we fall. We move forward when we stumble. We forgive when we are wounded.

St. Teresa of Avila once famously said that Christ has no body on earth but yours – he needs our eyes, hands and feet to do his work.

We are the Body of Christ. We continue what Christ began.

And as the Body of Christ, we also await a resurrection.

That is our greatest hope.

The people of Our Lady of Salvation understand that. Their prayers and lit candles and continued presence in a place of destruction stand as a testament to that – a beautiful hope that will not die.

“They will seize you and persecute you,” Christ said. “You will be hated because of my name.” But he also added: “It will lead to your giving testimony.”

This Sunday, pray for them. Pray for the families struggling to keep their faith, and finish their prayers.

Pray for all of the members of the Body of Christ around the world who carry the cross of persecution. Their wounds are our wounds, their loss is our loss. Pray that they can persevere and, as Christ said, “secure their lives.”

And so we pray to our Blessed Mother…

Hail Mary, full of grace, the Lord is with thee
Blessed art thou amongst women, and blessed is the fruit of thy womb, Jesus.
Holy Mary, Mother of God, pray for us sinners, now and at the hour of our death.
Amen.


Our Lady of Salvation, Our Lady Queen of Martyrs…

On exorcism: "We deal with angels and demons"
archives most recent
More from Beliefnet and our partners
previous posts