“On ‘The View,’ Stephen Colbert presented the Cross…”

“I hope that applause is for my mother’s womb.”

I certainly enjoyed when Stephen Colbert slipped that in during a recent appearance on ABC’s The View.

The Comedy Central star’s appearance got attention because the comedian walked off the set, as a joke. He was mimicking the much-talked-about recent appearance by Fox News man Bill O’Reilly on the show, where Whoopi Goldberg and Joy Behar stormed out because they disagreed with comments he made about the Ground Zero mosque controversy. I was grateful for the whole controversy and comedic follow-up because I probably would have never heard Colbert talk about his mother otherwise.

After the spoof of the O’Reilly incident, show co-host and den mother Barbara Walters got Colbert to be serious. She asked him about his childhood. He’s one of eleven. The womb line was in response to audience applause after he rattled off the names of his ten siblings, quickly and without hesitation. His father and two of the eleven died in a plane crash in 1974 when Stephen was ten years old. Walters asked: How did your amazing mother do it?

And with that, Colbert dropped the shtick and focused on something anyone who watches his show regularly has seen glimpses of: his faith. He’s a Catholic who unmistakably believes that should mean something. That there should be something different about you if you are. The one who has hope lives differently, after all.

And, so, on “The View,” he presented the Cross. He told Walters and the women around the interview couch about his mother and her “very strong faith.” “She taught us to still love life and not be bitter,” he said “And to realize that everybody suffers and if you can accept your suffering then you’ll just understand other people better. And, strangely enough, you have to be grateful for pain.”

It was a beautiful, faithful use of an opportunity given to him. 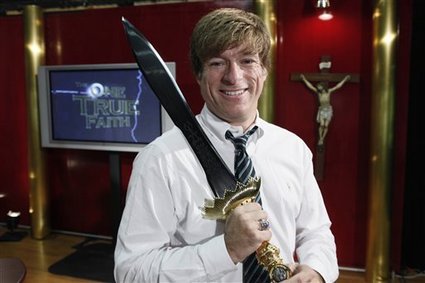