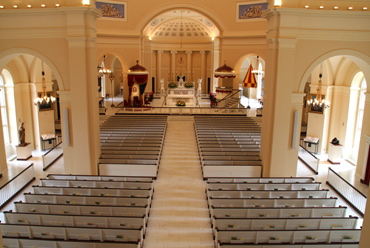 America’s first diocese may soon begin reducing masses as a result of the priest shortage.

From the Baltimore Sun:

With Father Patrick Carrion away, a nun led a morning service last week at St. Mary Star of the Sea, directing the gathering of 15 worshippers in Catholic hymns and prayers, and distributing the Communion that the priest had consecrated before leaving.

The pastor could not find another priest to fill in for him while he left his South Baltimore congregation to take a brief vacation. He returned in time to say four weekend Masses, but in the meantime left condensed daily worship services to Sister Victoria Staub.

This circumstance at one parish underscores the critical shortage of priests across the Archdiocese of Baltimore. In response, church leaders are asking its 153 parishes to evaluate Mass schedules and consider cutting back, particularly if similar services are offered nearby. In Baltimore alone, there are 50 parishes. Several within blocks of each other have identical Mass schedules and many services are lightly attended.

“If three parishes in the same area … all have 5 p.m. Mass on Saturday that are one-third full, why not schedule one Mass?” said Sean Caine, spokesman for the archdiocese, which includes more than 500,000 Catholics.

Nearly half of the archdiocese’s 153 active priests will reach the retirement age of 70 within the next 15 years, and 17 are already eligible to retire, church officials said. If the trend continues, there may be fewer than 100 priests by 2025.

Carrion’s congregation has already experienced the problem to a greater degree than many other churches. He is the pastor and lone priest serving the Catholic Community of South Baltimore, a grouping of three parishes — St. Mary’s, Holy Cross and Good Counsel — with about 1,200 members in all. The churches became one community two years ago in response to the scarcity of priests and their own declining congregations.

While the number of American Catholics has remained fairly constant at about 22 percent of the population, the number of priests continues to decline, according to the Center for Applied Research in the Apostolate at Georgetown University.

“When the number of priests comes close to the number of parishes, the problem is approaching critical,” said Mark Gray, senior research associate. “Unless there is a significant increase in ordinations, the shortage will only get worse.”

read next post
"On 'The View,' Stephen Colbert presented the Cross..."
archives most recent
More from Beliefnet and our partners
previous posts