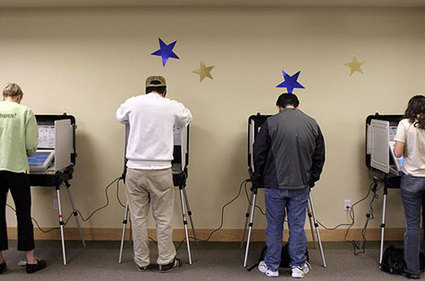 The President of the dissident group Catholics for Choice has his own spin on the subject of Catholics and how we vote:

As the election nears, many news outlets are repeating misinformation about what Catholics believe and what they can and should do when it comes to voting.

Conservative groups have targeted a largely Catholic group of antichoice Democrats who voted in favor of the Patient Protection and Affordable Care Act, falsely claiming that the bill permits federal funding of abortion.

A Catholic Tea Party has been mooted, and conservative Catholic bloggers who represent a tiny minority of Catholics are manufacturing controversies in order to get in the news. To overcome their lack of influence and numbers, they have decided to condemn bishops, politicians and their fellow lay Catholics in equal measure.

In Massachusetts, the bishops conference issued an election statement elevating certain issues as being of paramount importance for Catholics. According to their statement, “the sanctity of life [and] the family based on marriage between a man and a woman” come before “religious freedom and the well-being of the poor” in importance.

Read on to discover what he claims are five myths about Catholics and voting.

Meantime, at the other end of the spectrum, there’s this lengthy interview with soon-to-be Cardinal Raymond Burke, who is quoted as saying:

“As a bishop it’s my obligation in fact, to urge the faithful to carry out their civic duty in accord with their Catholic faith.”

“You can never vote for someone who favors absolutely the right to choice of a woman to destroy a human life in her womb or the right to a procured abortion.”

“So, the Catholic Church in teaching that sexual acts between persons of the same sex are intrinsically evil, are against nature itself, is simply announcing the truth, helping people to discriminate right from wrong in terms of their own activities.”

Archbishop Burke’s interview runs in several parts and can be viewed at this link.

read next post
People are awesome!
archives most recent
More from Beliefnet and our partners
previous posts