This news won’t fill the Vatican with joy:

Robert Edwards of Britain won the 2010 Nobel Prize in medicine on Monday for developing in-vitro fertilization, a controversial breakthrough that ignited sharp criticism from religious leaders but helped millions of infertile couples in the last three decades have children. 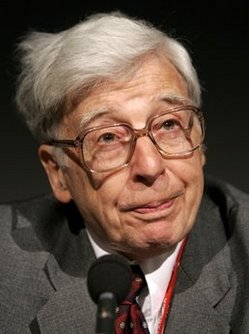 Edwards, an 85-year-old professor emeritus at the University of Cambridge, started working on IVF as early as the 1950s. He developed the technique — in which egg cells are removed from a woman, fertilized outside her body and then implanted into the womb — together with British gynecologist surgeon Patrick Steptoe, who died in 1988.

On July 25, 1978, Louise Brown in Britain became the first baby born through the groundbreaking procedure, marking a revolution in fertility treatment.
“(Edwards’) achievements have made it possible to treat infertility, a medical condition afflicting a large proportion of humanity, including more than 10 percent of all couples worldwide,” the medicine prize committee in Stockholm said in its citation.
“Approximately 4 million individuals have been born thanks to IVF,” the citation said. “Today, Robert Edwards’ vision is a reality and brings joy to infertile people all over the world.”

The work by Edwards and Steptoe stirred a “lively ethical debate,” the Nobel citation said, with the Vatican, other religious leaders and some scientists demanding the project be stopped. When the British Medical Research Council declined funding for Steptoe and Edwards, a private donation allowed them to continue their research.

The Vatican is opposed to IVF because it involves separating conception from the “conjugal act” — sexual intercourse between a husband and wife — and often results in the destruction of human embryos that are taken from a woman but not used.

There was no immediate comment from the Vatican’s top bioethics officials Monday to word of the Nobel.

read next post
"Make me a channel of your peace..."
archives most recent
More from Beliefnet and our partners
previous posts