Music and the new missal: a joyful noise? 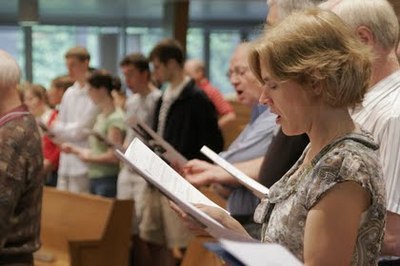 Some of the most dramatic changes in the new Roman Missal won’t just be in what we say, but in what we sing.

Music publishers are already working on that, according to CNS:

The new Roman Missal authorized Aug. 20 for use in the United States beginning in Advent of 2011 will pose significant challenges to both the musicians performing music based on new Mass texts and the congregations expected to learn them.

“The thing that’s on most people’s minds — rank-and-file music directors — is how to adapt to new texts, especially for things like the Glory to God, which is essentially the most heavily changed from the one we’ve been using for many, many years,” said Charles Gardner, who is director for spiritual life and worship and director of liturgical music for the Archdiocese of Indianapolis.

In an Aug. 18 telephone interview with Catholic News Service, Gardner also expressed concern that “the most commonly used wording of the Memorial Acclamation — ‘Christ has died,’ etc.” might not appear in the missal. The texts made public Aug. 20 for what is now called the Mystery of Faith did not include the phrase Gardner mentioned.

One liturgical music figure said musicians should not be bothered by the changes in Mass texts. The new translation was designed to follow more closely the text in the original Latin.

“It’s unleashing a lot of creative energy” among liturgical music composers, said Michael McMahon, executive director of the National Association for Pastoral Musicians, based in the Washington suburb of Silver Spring, Md.

Publishers are “on the verge of releasing … samples of new and revised Mass settings,” he told CNS.

The publisher OCP, once known as Oregon Catholic Press, is preparing a book for parishes that subscribe to its missal aids and annual “Music Issue” supplements with as many as nine new Mass settings that parishes can choose to sing.

McMahon said, “We’re half-expecting there to be a grace period, at least for sung settings of various Mass parts. They did this again back in 1970 (the year the first edition of the Roman Missal was issued), which will allow people (time to acclimate themselves). There are not that many sung texts that are changing.”

Check out more details about what lies ahead at the CNS link.

Did you hear the one about the funny deacon?
archives most recent
More from Beliefnet and our partners
previous posts