Holy water: nuns on board for surf contest

Summer may be drawing to a close, but that doesn’t mean surfing season is over.

Just ask the sisters who are stoked for some gnarly waves off the coast of New Jersey: 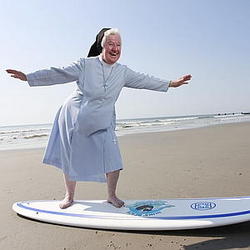 “I’m really getting the hang of this,” said the spritely, no-nonsense nun. “No one ever thought they’d see me on a board.”

Though Sister James, of Sister Servants of the Immaculate Heart of Mary, doesn’t actually hang 10, the nun has a special relationship with local surfers, and her mother house will host its 15th annual Nun’s Beach Surf Invitational on Sept. 11. The proceeds go to the maintenance of the breathtaking, 6½-acre, 150-bedroom waterfront complex.

“My heart is not big enough to express all the gratitude for all of this help,” she said.

Though it might seem like a strange alliance, the pact between surfer and nun in Stone Harbor was forged more than 60 years ago when local surfers approached the retreat asking if they could ride its waves. The nuns own the pristine, block-long strand between 111th and 112th streets.

The nuns warmly greeted the beach bums, and the swath of surf was soon dubbed “Nun’s Beach.” The sisters often sit on the beach and even draw spiritual inspiration watching the wave-riders.

“It’s very peaceful,” said Sister James, the retreat’s property manager. “You see how the water holds them up, balances them and if you ride with the water, it will get you where you want to go. That’s how it is with the grace of God.”

Bill Deger, now 64, and his surfing buddies once coaxed an 83-year-old nun onto a surfboard.

“One of her life’s dreams was to be able to surf,” Deger, 64, said of the late Sister Loyola. “So we got her out in knee-deep water and held her on. She loved it. It was an incredible experience.”