The Republican strategist, editor and talk show host (and wife of Democratic loud mouth, James Carville) spoke to the Catholic Media Convention last weekend. At one point, she mentioned that she was raised Methodist, but joined the Catholic Church this past Easter, through RCIA.

From Catholics News Service, via the Catholic Spirit: 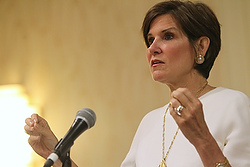 She shared her observations on the current political climate in the country as it heads toward midterm elections.

A former adviser to President George W. Bush and Vice President Dick Cheney, Matalin is editor-in-chief of Threshold Editions, an imprint of Simon & Schuster. She also is a CNN contributor and co-hosts a radio show.

She filled in for her husband, Democratic strategist James Carville, who was scheduled to speak but had a last-minute conflict. The couple and their two daughters live in New Orleans.

Matalin was introduced by Father John Carville, retired vicar general of the Diocese of Baton Rouge and her husband’s cousin.

The priest said he’s often asked if Matalin and Carville fight all the time. Their heated debates on political talk shows are legendary. Carville, a Louisiana native nicknamed the “Ragin’ Cajun” for his fiery temper, made headlines recently for attacking the Obama administration’s response to the massive oil spill in the Gulf of Mexico.

“They argue almost only on TV,” the priest said. “They are very professional and very careful to stay out of each other’s sandbox. … They may be a political odd couple, but they share a love for the political process.”

In her remarks, Matalin said the upcoming elections will be historic. “That’s not hyperbole. The last couple of cycles have been historic,” including the 2008 election of President Barack Obama, she said.

Check out the rest at the link.

read next post
After 27 years, a deacon becomes a priest
archives most recent
More from Beliefnet and our partners
previous posts