After 27 years, a deacon becomes a priest

Stories like this one in Kentucky are rare, but not unheard of. But it’s big enough that is made the local paper:

“I’m not used to being called Father Jim,” Reinhart said Sunday as he greeted people in the vestibule of St. Linus Church in Oak Lawn.

Reinhart, 68, celebrated his first Mass at noon Sunday at the church where he served as a deacon for 27 years.

Reinhart was ordained May 29 at the Cathedral of the Assumption in Louisville, Ky. He returns to Kentucky later this week where he will serve at St. Augustine Church in Lebanon, a small town in the center of the state.

Reinhart was surrounded by family as he accepted congratulations from parishioners, many of whom sought his blessing.

“We are really proud of him,” said Reinhart’s son, Paul, a Chicago Ridge resident. “It was a big step for him to do it at his age. I think it’s always been his calling.”

Reinhart added that his father will minister from a unique perspective of having raised a family.

He has two sons and a daughter, as well as seven grandchildren.

“There are so many people to thank. It been a beautiful opportunity,” Reinhart said at the close of Mass, which he celebrated with several other priests and three deacons.

Reinhart admitted to experiencing some jitters during the service.

Reinhart spent time in the seminary many years ago, but eventually decided to get married. 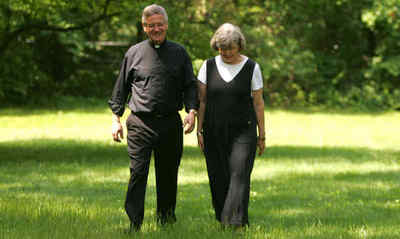 The priest -- and his Mrs.
archives most recent
More from Beliefnet and our partners
previous posts