Ruling: “under God” is constitutional

For some reason, this bit of news didn’t get much attention, but it’s worth noting: 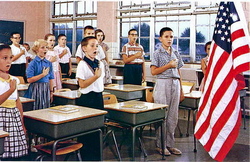 The Pledge of Allegiance, with its inclusion of the words “under God,” is constitutional, a federal appeals court ruled on Thursday (March 11), reversing a previous ruling.

The 2-1 ruling answers a challenge by California atheist Michael Newdow, who argued that the use of the pledge in a Northern California school district — where children of atheists had to listen to others recite it– violated the First Amendment’s clause prohibiting the establishment of religion.

In 2002, the 9th Circuit Court ruled that the use of the words “under God” in the pledge violated the Constitution. The current court called that decision “erroneous.” The Supreme Court later dismissed the earlier Newdow suit, sidestepping the church-state issues by finding he did not have standing to sue.

“The 9th Circuit today failed to uphold the basic principle found within the first ten words of the Bill of Rights … that the government is required to show equal respect to the lawful religious views of all individuals,” Newdow said Thursday.

Kevin J. “Seamus” Hasson, founder and president of the Becket Fund for Religious Liberty, who argued for the school district, said the court “finally stood up” for the Pledge of Allegiance.

In a scathing and lengthy dissent, Judge Stephen Reinhardt said the words “under God” have an “undeniably religious purpose” and “we have failed in our constitutional duty as a court.”

In a separate decision, also issued Thursday, the 9th Circuit dismissed Newdow’s challenge to the words “In God We Trust” on U.S. currency.