Drop-kick me, Jesus: meet the Catholic coach of the Baltimore Ravens

How’s this for a touchdown?

A thoughtful reader sent this along: a terrific profile of the head coach of the Baltimore Ravens, who just happens to be Catholic.

From the Catholic Review: 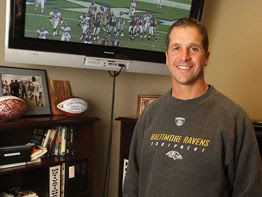 Not long ago, John Harbaugh walked into a barbershop near his home off Falls Road. As the wholesome-looking 46-year-old sat in the barber’s chair with a smock draped around his torso, a young hairdresser carefully snipped his closely-cropped brown hair.

“What are you doing this weekend?” she asked casually.

He offered an answer that he has been able to get away with most of his life.

The hairdresser kept up her poker face a little longer. She was trying to tease a man whose visage has quickly become one of the more recognizable in the region.

Eleven months ago, Harbaugh, a lifelong Catholic, was plucked from relative obscurity to become the third head coach in Baltimore Ravens history.

Not realizing the joke was on him, Harbaugh steered the conversation with his hairdresser away from his career. He never boasted about his high-profile job or tried to embarrass his playful tormentor.

The Ohio native wanted to stick to the ideals that have defined his life: treating others with respect and staying humble. Catholicism, he says, gave him those principles and they apply to the hairdresser just as much as they do the multi-million dollar athletes he coaches.

“The first thing you notice about John is that he treats others the way he wants to be treated,” said Jack Harbaugh, his father, who spent 41 years as a coach and directed Western Kentucky to the National Collegiate Athletic Association Division I-AA title in 2002. “He’s a sensitive, caring individual.”

The Harbaugh Way is working.

The Ravens enter a Nov. 16 game against the New York Giants, the defending Super Bowl champion, with a surprising 6-3 record and a four-game win streak. They barely resemble the 2007 edition of the Ravens, and there are whispers of a playoff berth in the parity-laden National Football League.

Five days before the biggest game of the season, Harbaugh sat in his office at the Ravens’ Owings Mills training facility for a wide-ranging interview that discussed his faith and profession, and how the two mix.

When Harbaugh was growing up, he didn’t stay in one place very long. His father was an up-and-coming coach who relocated his family as high school and college opportunities came along.

The family moved from Ohio to Iowa to Michigan over the course of a decade. When his father coached at the University of Michigan, Harbaugh attended a public high school in Ann Arbor, but he spent almost all of his elementary school years in various Catholic schools.

Harbaugh has fond memories of the nuns who kept him in line. After he clapped erasers on the walls, one punished him by making him write a sentence hundreds of times on the chalkboard. Another made him work as a janitor for two weeks after he scaled a church tower so he could clang the bell.

“Accountability was a big part of it,” said Harbaugh, whose favorite duty as an altar boy was ringing the bells at Mass.

“They made you be courteous and respectful and not be judgmental of others,” he said. “To understand right from wrong was the biggest thing.”

There was a natural rivalry between Harbaugh and his younger brother, Jim. Just a year after John climbed the church bell tower, Jim tried to match his brother’s feat only to be stymied halfway by a fear of heights. School officials had to get John to scale the tower one more time to talk his little brother down.

Jim admires his big brother’s dogged determination, and calls him his hero. He remembered that when John was a 10-year-old hockey player, the metal blade of a wayward skate sliced open his knee, sidelining him through baseball season. Other knee injuries slowed him in high school and at Miami University in Ohio, where he played defensive back.

“He never lost faith,” said Jim Harbaugh, a former Ravens’ quarterback who now serves as the head coach at Stanford University. “He always rehabbed harder than he thought was possible.”

Harbaugh faced a steep climb up the coaching ladder, laboring for more than a decade in the collegiate ranks before joining the Philadelphia Eagles in 1998 as a special teams coach and then their secondary coach in 2007.

Harbaugh was often among the runners-up when interviewing for jobs at places like Boston College, according to his brother.

“His relationship with God is the thing he leans on whenever he has tough times,” said Jim Harbaugh, noting that their father Jack and mother Jackie encouraged faith development among the brothers and their sister, Joani, who is married to Indiana University basketball coach Tom Crean.

“When he didn’t get a job, he would say, ‘God has a different plan for me,’” Jim Harbaugh said.

Father Christopher Whatley, pastor of St. Mark in Catonsville and Catholic chaplain for the Ravens, said the head coach is always at Sunday Mass with other Catholic coaches before games. On the road, local priests are called ahead of time to lead worship.

“He’s very prayerful during Mass and very attentive to what I have to share in the homily,” said Father Whatley, who celebrates the Ravens’ Mass at a downtown hotel near the stadium. “He’s there to gain some spiritual nourishment.”

Visit the CR link for the rest. Great stuff.